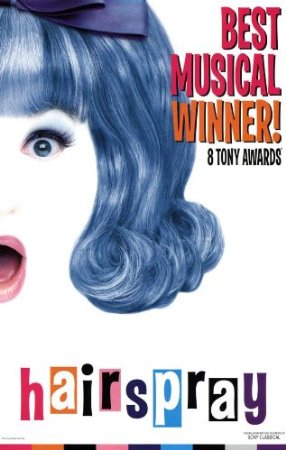 Act I
As “pleasantly plump” teenager Tracy Turnblad lies in bed, she muses about her love for her hometown, her love of dancing, and her desire to be famous (“Good Morning Baltimore”). She goes to school and is given a warning for "inappropriate hair height". After school, Tracy rushes home with her best friend, Penny, to catch the local teenage dance show, The Corny Collins Show (“The Nicest Kids in Town”). Edna, Tracy’s shy and plus-sized mother, is ironing and complains about the noise of the music coming from the television, while Penny’s mother, Prudy complains about it being race music. After an announcement that auditions for a place on the show will be held,due to the fact that Brenda (one of the Corny Collins Council Members)leaves the show due to being pregnant. Tracy begs her mother for permission to audition. Edna, fearing that Tracy will be laughed at due to her weight, refuses. Penny and Amber (the main dancer on The Corny Collins Show) have similar arguments with their mothers ("Mama, I’m a Big Girl Now").

After gaining permission and support from her father, Wilbur, Tracy auditions for the show and bumps into teenage heartthrob, Link Larkin, which leads into a dream sequence ("I Can Hear the Bells"). Velma Von Tussle, the racist producer of The Corny Collins Show, rejects Tracy from the audition because of her size ("(The Legend of) Miss Baltimore Crabs"), as well as refusing a black girl, Little Inez.

Back at school, Tracy is sent to detention for her "monumental hair-don't". There she meets black dancer, Seaweed J. Stubbs (the son of the host of "Negro Day" on The Corny Collins Show, Motormouth Maybelle), who teaches her several dance moves. She uses the new dance steps at the Sophomore Hop the following day to introduce herself to Corny Collins ("The Madison"). When Corny sees how well Tracy can dance, he gives her a place on the show ("The Nicest Kids in Town" (Reprise)). During the broadcast, Link, following Corny’s suggestion, sings "It Takes Two" to Tracy, much to Amber’s dismay. After the show, Mr. Spritzer, the show’s worrisome sponsor, appeals to Velma over Tracy’s appointment to the Council. Velma, threatening to fire Corny from the show, is eventually left distraught and determines to ruin Tracy ("Velma’s Revenge").

At the Turnblad house, Edna is receiving calls from fans who saw Tracy on the show. A call comes in from Mr. Pinky, the owner of a plus-size dress shop, for an endorsement. Tracy pleads with her mother to come with her and to act as her agent although Edna has not left their apartment in years. Finally making it outside, Edna is given a huge makeover, as she is told, ("Welcome to the 60's") and Tracy becomes the spokes-girl for the shop. At school, signs of Tracy’s fame are evident in the schoolyard, with graffiti on the walls and another Council Member sporting Tracy’s signature hairdo. During a game of dodge ball, a jealous Amber knocks Tracy out, and Link rushes to her side. Penny and Seaweed, who have developed a liking for each other, rush to fetch the school nurse, only to find her out sick. Seaweed, suggesting that some fun would make Tracy feel better, invites all of them to his mother’s record shop for a platter party ("Run and Tell That!").

At the shop, Tracy rallies everyone to march against the station on the following day’s Mother-Daughter Day, as blacks are not allowed on the show except for the monthly Negro Day. Before they start, Motormouth Maybelle convinces the initially reluctant Edna and Wilbur to march as well. During the protest, led by Motormouth, Velma calls the police and fights break out. When the police arrive on the scene, almost everyone is arrested ("Big, Blonde, and Beautiful").

Act II
After the march, most of the women are locked up in a women's penitentiary ("The Big Dollhouse"). Because of Velma’s dirty tactics, the governor pardons and releases both her and Amber. Wilbur bails out the remaining people, excluding Tracy who is forced to remain in jail through another one of Velma’s manipulations. Tracy is alone and wishes that Link could be with her ("Good Morning Baltimore" (Reprise)). Back at the Har-De-Har Hut (Wilbur's joke shop), Wilbur and Edna are left destitute because of the money it cost them to bail everyone out and with Tracy still in prison. Edna sympathizes with her daughter’s dream – she had dreamt of making her “own line of queen-sized dress patterns”. She and Wilbur reminisce about their past and how they can never be parted from each other (“(You’re) Timeless to Me”).

During the night, Link sneaks into the jail where he finds Tracy in solitary confinement. As Link and Tracy reunite, Penny’s mother, Prudy, punishes Penny for “going to jail without her permission” and ties her up in her bedroom where Seaweed comes to her rescue. Both couples declare their love for one another ("Without Love"). After escaping from their respective prisons, the couples seek refuge at Motormouth Maybelle’s Record Shop. Tracy thinks that it is unfair that after all of their hard work, The Corny Collins Show is still segregated. They devise a plan to help integrate the show, and Motormouth remembers their long fight for equality ("I Know Where I’ve Been").

On the day of the Miss Teenage Hairspray competition, Corny Collins starts the show with a song ("It’s) Hairspray"). Amber shows off her talents in a bid to get more votes from the viewers ("Cooties"). Just as the results are about to be announced, Tracy (whose hair is straightened as a sign of her "non-conformity to the man") takes over the stage, and is joined by Link, Penny (now transformed from drool to cool), Seaweed, Edna, Wilbur, Little Inez, and Motormouth. Tracy is declared the winner of the competition and Corny declares The Corny Collins Show to finally be racially integrated. When all is announced, Mr. Spritzer runs onstage thrilled with the public’s response to the telecast and announces that the governor has pardoned Tracy and he offers Link a recording contract and Motermouth Maybelle the position of vice president of Ultra Glow – beauty products for women of color. Prudy arrives at the station and, seeing how happy Penny is with Seaweed, accepts her daughter for who she is. At the height of the moment, the company invites Amber and Velma to join the celebration. With the station in joyous celebration, Tracy and Link cement their love with a kiss ("You Can’t Stop the Beat").