The musical is set in Heartsville, U.S.A, once upon a time. The exact time period is not specified, but the play takes place across a school year, beginning on the first day and ending at prom. This is a fairy tale America, where the majority of the world is homosexual, with heterosexuals subject to heterophobia. Despite the fairy tale aspect, the world is essentially equivalent to ours, with references to Star Trek, the internet, Wayne Gretzky, and many other recognizable people, things or ideas. The majority of the play is set at Heartsville High, where the main characters are students.

Zanna, Don't! had a developmental run Off-Broadway at the Rodney Kirk Theatre from October 17, 2002, to November 3, 2002. It had a second off-Broadway run beginning on March 20, 2003 at the John Houseman Theater. The run closed after three months, playing 17 previews and 119 performances. Devanand Janki directed and choreographed, with a cast that featured Jai Rodriguez as the "Magical Matchmaker" Zanna in the 2003 production. It was produced off-Broadway by Jack M. Dalgleish in association with Stephanie A. Joel. A Broadway production was planned for 2005, but was cancelled. The title of the musical would have been changed from Zanna, Don't! to simply Zanna!. After workshops with Avenue Q star John Tartaglia, revamping of the script and score, the run was postponed. The title of the show was originally inspired by the film Xanadu, because Acito originally envisioned the lead character on roller skates, and Acito wanted to pay homage to the film. But, the roller-skating idea was soon dropped. Nevertheless, "Zanna, Don't is a loving tribute to pop culture, and I thought a reference to Xanadu would be appropriate. It sort of represents the best and – many would argue – the worst of pop culture."

Zanna, Don't! has been performed numerous times throughout the United States, for example at Bailiwick Repertory, Chicago, Illinois in 2007, the New Conservatory Theatre Center in San Francisco, California in 2008, and Atlanta, Georgia, in May 2009. It debuted in Europe on August 1, 2008 at George Square Theatre, Edinburgh, by students of the RSAMD, where it ran until 24 August.

Zanna Don't! premiered in London in May 2009, starring Mike Shearer as Zanna. Presented by Wild Oats Productions as part of the Enterprise 09 Festival, the musical was directed by Joseph C. Walsh and choreographed by Philip Scutt. It played a limited sell out season at The Space. The production later transferred to the Upstairs at the Gatehouse in June 2009, where it received rave reviews. The Zanna, Don't! cast could also be seen at West End Live! Leicester Square and Best of The Westend Leicester Square Theatre.[clarification needed] In the west coast premiere at New Conservatory Theatre Center, which ran from November 2008 to February 2009, Mike was played by Timitio Artusio, Steve was played by Stephen Foreman, Kate by Katrina McGraw, Roberta by Cindy Im, Candi by Miquela Sierra, Buck by Rodney Earl Jackson Jr., Tank by Brian J. Patterson and a spirited Price Troche Jr. Played the leading role of Zanna. The NCTC cast won awards for best ensemble, best choreography and best musical direction from the Bay Area Theatre Critics Circle (BATCC.)

A new Los Angeles production of "Zanna, Don't!" premieres January 6, 2012, and runs until February 25, 2012 at Theatre/Theater (5041 West Pico Boulevard Los Angeles, CA). This production is produced by The Spotlight Theatre from Bakersfield, California. Directed by Alex Neal, and the cast features Kenny Maclin as Zanna, Nick Ono as Steve, Tessa Ogles as Kate, Zachary Gonzalez as Mike, Catt Fox as Roberta, Alex Bennett as Tank, Hannah DiMolfetto as Candi, Alex Neal as Arvin, and Hannah DiMolfetto as Loretta. The production is sponsored in part by The Kern County Board of Trade. Assistant Director for this production is Steven Littles II, choreography by Marvin Ramey, vocal direction by Sarah Smith, and technical design by Jarred Clowes.

Zanna - The magical matchmaker himself, Zanna has devoted his life to creating couples, while ignoring his own lovelife. His best friends are a bird (Cindy) and his magic wand.
Tank - A kind and caring DJ, who describes himself as "a sort of charming, somewhat handsome, not so princely guy," who cares for Zanna deeply but goes unnoticed for most of the show.
Kate - A notorious overachiever with plans for a medical degree, she mistakes her own heterosexuality for ambition but tries with Roberta anyway. She is the captain of the Girls' Intramural Mechanical Bull-Riding Team.
Roberta - A waitress at a diner in her spare time, she has found no luck in love- each new girlfriend seems to "dump her the next day." Her best friend is Mike.
Steve - New to Heartsville, Steve's two dads are five-star generals. As a result, Steve has spent much of his life moving around and never making deep connections, but Zanna is sure he'll find a place in Heartsville. He's the quarterback of the football team.
Mike - A champion chess player and school sex symbol, Mike is a modest and caring teen, and best friends with Roberta.
Candi - A domineering girl, she is involved in the Drama Club and knows all the latest gossip.
Buck - Candi's friend, his opinions are overshadowed by her own ideas.
Bronco, Tex, and Loretta - Played by the same actors as Buck, Tank, and Candi
Loretta 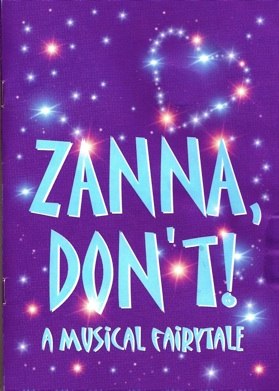