This adaptation of Mary Hayley Bell's celebrated novel and its film incarnation (which starred the author's daughter, Hayley Mills, and Alan Bates) was an absolute triumph in its English stage premiere and subsequent presentation at the Edinburgh Theatre Festival.

Act one
December in the late 1950s in a Lancashire village. Out of the darkness and howling wind a voice sings "Behold! For the day of the Lord will come." (PROLOGUE) Someone strikes a match - it is Eddie, a labourer on the Bostock farm, who is carrying a sack from which kittens' miaows can be heard. He drops the sack into a canal. Cathy, Nan and Charles, Mr. Bostock's children, watch him from a hiding place and, as Eddie exits, they rescue the kittens. Caring for them will be difficult; they can not show them to Dad, as he will give them back to Eddie (THE KITTENS). Charles tries unsuccessfully to give one to his friend, Jackie Greenwood, and to a Salvation Army woman. However, as nobody wants them, they eventually decide to keep all three in a barn on the farm.

Outside the barn, Cathy, the eldest, makes the other two promise not to tell anyone of the kittens' existence. Nan asks who is going to look after them and Charles, echoing the bland sentiments of the Salvation Army woman, says that "Jesus will". Cathy tells him not to be daft as Jesus can not look after them because he is dead. Nan, shocked, says that He will come and get Cathy for saying such things. Cathy is not impressed and, after sending the others to the farmhouse, enters the barn. She goes to a large mound of hay and buries the kittens' basket in it. Suddenly a man bolts upright from out of the hay and stares wide-eyed at Cathy. He is delirious and his clothes and hands are all bloody from a wound in his side. Shocked, Cathy asks who he is and he, also shocked, utters "Jesus Christ!" and collapses. Cathy freezes in horror.

In the farmhouse, Dad is talking to Auntie, his sister; since the death of his wife she has looked after him and the children. Cathy rushes in, shaken from her experience. She tells Nan that she has seen Jesus in their barn. Over dinner Cathy sings of what she has discovered, wondering why Jesus has picked on her (CATHY'S PRAYER).

The next morning, Cathy and Nan, having refused to tell Charles their secret, go to the barn. The Man is asleep and Nan remarks that she does not feel afraid (FUNNY, IT DOESN'T FEEL STRANGE). Charles suddenly enters. He has come to play with his kitten and sees The Man. Cathy and Nan tell him that The Man is Jesus and make him swear not to tell. The Man wakes up and, after accepting some food, falls back to sleep.

Sunday morning. Parents and children arrive at the Church and are greeted by the Vicar. The children are sent off to Sunday School. We learn from the village policeman that an escaped murderer is on the loose in the district (WHEN YOU'RE LOOKING FOR A MURDERER). At the Sunday School, Miss Lodge, the teacher, is asked by Cathy what would happen if Jesus came back —could they stop Him being crucified a second time? Miss Lodge says that people would have to try harder this time to stop that from happening and that they should praise Him and follow Him.

The three children get more food for The Man and laugh about how everyone will want to come to see Jesus once they know that He is in their barn — even THE MAYOR OF BURNLEY! At the barn door there is gathered a group of other children — Charles has obviously not been able to keep the secret. Cathy makes the other children swear not to tell and they file into the barn. The Man is getting better, but is still in pain from his injury. Cathy asks Charles to go back to the house to get some cloth to clean The Man's wound. The other children, after shyly saying hello, ask him to tell a story. He is handed a magazine and a bible, but chooses to read from the magazine. Whilst he is doing so, the children sing of how they will protect Jesus from danger this time (HYMN). Suddenly there is a noise outside — it is Mr. Bostock with Charles. The children hide The Man in the hay as Dad and Charles enter. Dad wants to know what the children are doing there, but on seeing the bible thinks that Cathy has been reading to them. He asks Cathy if she has been talking to any strangers and warns her to be careful. When Dad goes The Man emerges from the hay and Cathy asks the children to go because he is tired. The Man thanks Cathy for not giving him away and she helps to clean his wounded side. He asks her why the children are helping him. She replies that it is because they love Him. As she turns to go, she gives him a picture of Jesus that she took from the Sunday School, and says that it is a picture of Him.

Act two
December 23. The villagers are still alarmed about the convict and Dad lectures Cathy once more about not speaking to strangers (OPENING SEQUENCE). In the school play-ground, Raymond, the village bully, on being told by the children that they have seen Jesus, captures and bullies Jackie Greenwood into saying three times that he has not seen Him.

In the barn Cathy gives The Man more food. He asks for cigarettes, somewhat to Cathy's surprise, and says that he must be going soon. Charles enters — he has come to see Spider, his kitten. On finding it dead he runs outside, distraught, followed by Cathy. He tells her that The Man cannot be Jesus as He would never have let the kitten die; Cathy comforts Charles and tells him that it is Jesus — she just knows (SPIDER).

At the Sunday School that evening the children enact out THE NATIVITY to their bored parents, who seem more interested in criticising each other than watching the play. After polite applause everyone attends to the tea that has been laid out. Cathy, thinking of Charles' kitten, asks the Vicar why it is that Jesus lets some things die before their time. The Vicar gives a very evasive reply and Charles and Cathy realise that he does not know. The other children ask Cathy if they can go and see The Man and, using the distraction caused by DAD'S PARTY PIECE (Ione On A Moor), they quietly slip out.

At the Barn the twelve children sit around The Man and eat their party cakes. The Man is moved by the love and faith that the children have for him. At that moment there is a loud banging on the door — it is Raymond. He has heard them talking to The Man, and, when they refuse to let him in, tells them that "they will be sorry" and dashes off. The Man, realising that Raymond has gone to tell the adults about him, says that he will be going later that evening. The children are upset, and as they silently eat their cakes The Man and Elizabeth, one of the children, put their feelings into words (ANGELS). However, when the children start to exit, The Man says that he might not go tonight and they leave happier. The Man, realising that he has not got time to escape, locks the door from the inside and gives vent to his emotions (I DON'T KNOW WHAT THEY'RE WAITING TO HEAR).

At the farmhouse Cathy, Nan and Charles burst in on Dad and Raymond. Raymond leaves, having told Dad that he heard a strange man talking to the children in the barn. The children tell Dad that they will only tell him The Man's identity if he promises to keep it secret. After some wavering he makes the promise, but when they tell him it becomes obvious that he does not believe them (THE SECRET). The phone rings — it is the Police Inspector, whom Raymond has also told — and Cathy, on impulse, darts out of the door to warn The Man of his imminent arrest.

Standing outside an opening at the back of the barn Cathy pleads with The Man to leave before it is too late, but he refuses (PLEASE, JESUS ... ). She throws some cigarettes and matches through the hole and says that she will stay with him. Police cars, their sirens blaring, can be heard approaching. Nan appears at Cathy's side and tells her to go to the front of the barn where there is frenetic activity. Policemen and the children's fathers are all rushing about in the darkness trying to find some light. When they find a torch the light shows up a mass of children's faces. All the children of the village have amassed themselves in front of the barn door to stop the arrest (FOLLOW! FOLLOW! FOLLOW HIM!). They resolutely refuse to move and link arms. Suddenly a policeman notices that smoke is pouring out of the barn's roof and raises the alarm (THE FIRE). Despite the fire the children huddle calmly and defiantly together. When the fire has been extinguished, Dad ushers his children into the gutted interior where there is no sign of The Man. There is, however, something Dad wants them to see and he shines his torch on to a large cross which has been painted on the wall. The children realise that this is The Man's goodbye and that he is now finally free. (HYMN - Reprise). 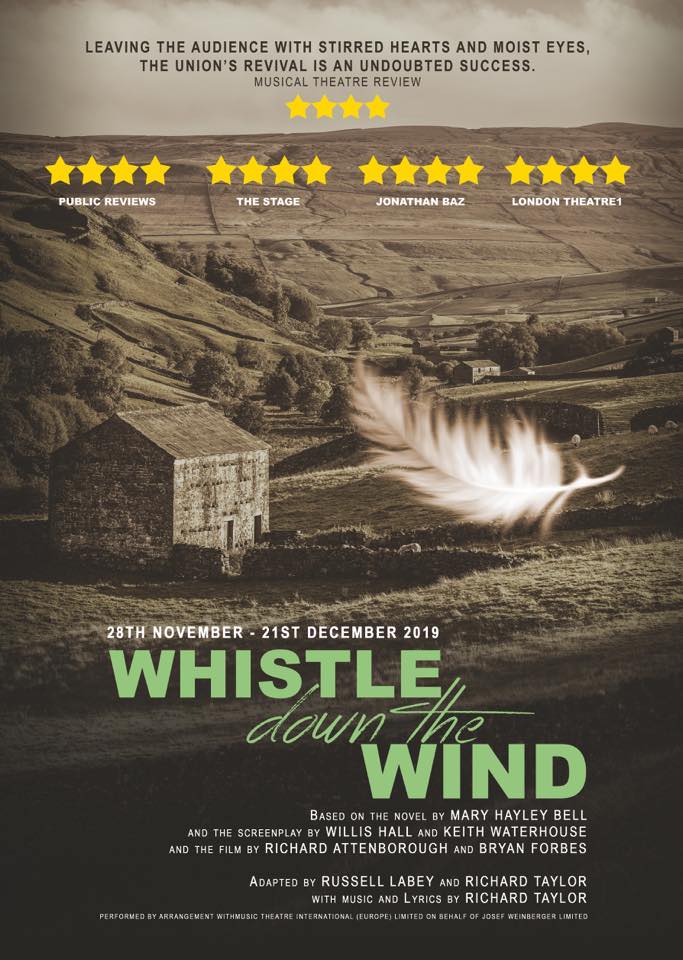