Original Film
The original 1975 film was directed by Michael Ritchie with a screenplay by Jerry Belson. It starred Barbara Feldon as Brenda DiCarlo, Nicholas Pryor as Andy DiCarlo (Brenda's husband in the film), Bruce Dern as Big Bob Freelander, Geoffrey Lewis as Wilson Shears, Joan Prather as Robin Gibson, Annette O'Toole as Doria Hudson, Melanie Griffith as Karen Love, and choreographer Michael Kidd as Tommy French. The movie was filmed on location in Santa Rosa, California with the pageant festivities at Veteran's Memorial Auditorium.
Production
The original production opened on Broadway on November 24, 1986 at the Lunt-Fontanne Theatre and closed on January 3, 1987 after 48 performances. It was directed by Ashman with musical staging by Mary Kyte. It received a Tony Award nomination for Best Book of a Musical as well as Drama Desk Award nominations for Outstanding Featured Actor in a Musical (Michael O'Gorman) and Outstanding Costume Design (William Ivy Long).
Smile chronicles the backstage troubles of the fictional 1985 California Young American Miss beauty pageant held in Santa Rosa, California. The main characters include Robin Gibson and Doria Hudson, two contestants who befriend and help each other throughout the week; Brenda DiCarlo Freelander, an ex-Young American Miss second-runner-up coordinating the pageant; and Brenda's husband Big Bob, an RV Salesman trying to help her through the week.
Smile is considered a "lost" musical because no official cast recording was ever made. However, there does exist a demo CD which is a primary source for groups performing the show. Some of the songs from the show, "Disneyland," "Smile," and "In Our Hands," received their first recordings on Bruce Kimmel's Unsung Musicals album, released by Varese Sarabande. "Disneyland" was sung by Jodi Benson, who originated it in the show. On a subsequent volume Maria's Song was also recorded. In November 2008, the record label PS Classics rectified this loss, releasing the album Howard Sings Ashman. The second disc is comprised completely of songs from Smile, sung by Ashman and Hamlisch, with Hamlisch at the piano. They also put a transcript of a taped conversation between Ashman, Hamlisch and Bob Fosse discussing the development of the musical on their website.
Subsequent activity
After the Broadway production of Smile flopped, Ashman and Hamlisch revised the show for stock productions. Book changes include the change of Shawn's roommate from Connie-Sue to Maria, and the addition of some material for Bob. The score was further revised, gaining a completely re-structured opening number (though retaining most of the original melody and words), a new song for Brenda ("Very Best Week of Your Lives") that completely replaced the Orientation Sequence musically, a new song for Bob (Bob's Song), a new number for the winner of the pageant (There Goes the Girl) and a completely new melody and lyric set for Robin's letters home and a slight decrease in the time given to them. The ending was also re-worked giving Bob a significant musical section new to the revised version.
Many of the small lyric changes to the licensed version actually originated before the Broadway production. When reading Lincoln Center's photocopy of the Broadway rehearsal script to Smile, many of the licensed lyrics are printed but scratched out and replaced with what was sung at the Lunt-Fontanne, handwritten.
An hour-long recording of the licensed version was made for Samuel French (the licensing agent) to distribute to groups interested in performing Smile. It uses many of the original Broadway cast, including Marsha Waterbury, Jodi Benson, Anne Marie Bobby, Tia Riebling and Dick Patterson. Director and author Howard Ashman played the role of Big Bob in Jeff McCarthy's absence. This recording is often referred to incorrectly as an unreleased cast recording when it is in fact a demo. 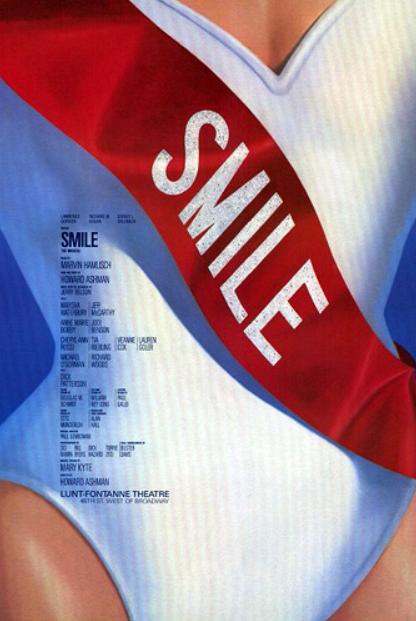