This show was first staged in March 2009 as an amateur cabaret-type revue in Valetta on the island of Malta. With some financial support from an enthusiastic Cameron Mackintosh, the original company re-created the show for the Edinburgh Fringe in 2009. It was then re-cast with established British professionals for this London debut. Praised for its witty dialogue and hilarious lyrics, this was generally welcomed as an entertaining satire, though some complained of its demeaning attitude to women.

Innocent Maltese, Stefan, on the eve of his marriage to childhood sweetheart Jade, finds out that she has slept with everyone in Malta. So he flees to America to live the American Dream. But the moment he arrives he meets Marvin Scoresleazy, the flashy, medallioned porn-film director who is desperate to finish his latest film to pay off his Mob creditors. Stefan gets caught up in this sleazy world, and with the film’s leading players, the hunky well-endowed Dr Johnny and the equally well endowed Sanddy (with a Double D). The various parts of the plot are linked by an endearingly smarmy Narrator (in “Rocky Horror” style) and by a Miscellaneous Man who complainingly plays all the bit parts. Finally Stefan decides to return home to Jade – though initially no one can find Malta on the map because they are all “bloody Yanks” (a convenient rhyme, of course!)

In 2008 Maltese scriptwriter Malcolm Galea caught up with the equally Maltese composer Kris Spiteri and the somewhat less Maltese music producer Boris Cezek with the intention of creating a musical. This show was only ever meant to run over two weekends at a theatre in the backstreets of Valletta and the writers' main intention was to see how well they worked together. Another aim of theirs was to enjoy themselves - and if the audience had a good time also, it would have been an added bonus.

But alas ’twas not to be. Maltese film producer Winston Azzopardi happened to be among the audience and was enamoured by the show. He approached the writers with a lot of big producer-type talk and before anyone knew it, they found themselves on their way to London to meet the god of all things musical: Cameron Mackintosh. Impressed, intrigued or merely amused by the boys' effort, Sir Cameron offered them some financial aid to take the show to the Edinburgh Fringe and, thanks to some further assistance from the Malta Arts Fund, Porn the Musical was suddenly being prepared for Edinburgh.

Two songs were dropped and the script was trimmed down to fit into the 75-minute time frame, and the festival version of Porn the Musical was then tested with a seven-day run at Argotti Gardens in Floriana in July 2009. After that, the production moved to the George IV Theatre for a full run at the Edinburgh Festival Fringe, 2009. The Maltese cast held their own against the professional actors that were featured in most of other musicals and when the dust cleared, it was found that the show had garnered mostly 4-Star reviews and was also nominated for Best New Musical. 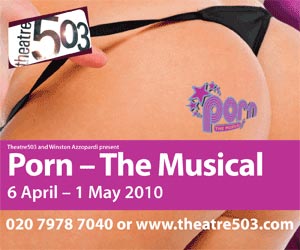