The International Ladies Garment Workers Union used the Princess Theatre in New York City as a meeting hall. The union sponsored an inexpensive revue with ILGWU workers as the cast and two pianos. Because of their factory jobs, participants could rehearse only at night and on weekends, and initial performances were presented only on Friday and Saturday nights.[1][2] The original cast was made up of cutters, basters, and sewing machine operators.
Pins and Needles looked at current events from a pro-union standpoint. It was "lighthearted look at young workers in a changing society in the middle of America's most politically engaged city."[2] Skits spoofed everything from Fascist European dictators to bigots in the DAR. Word-of-mouth was so enthusiastically positive that the cast abandoned their day jobs and the production expanded to a full performance schedule of eight shows per week. New songs and skits were introduced every few months to keep the show topical.
According to John Kenrick, Pins and Needles "is the only hit ever produced by a labor union, and the only time when a group of unknown non-professionals brought a successful musical to Broadway."

From 1937 to 1941, Pins & Needles was a hit musical comedy revue running on Broadway. But this was no ordinary Broadway musical: It was written for and performed by members of The International Ladies Garment Workers' Union. With songs by Harold Rome, ILGWU members sang out for all the people fighting for jobs, housing, a minimum wage, immigrants' rights and economic justice, and performed sketches that satirized the European fascists and the U.S. right-wing reactionaries who rose up against FDR's New Deal.

Productions
Originally written for a small theatrical production, the first production of Pins and Needles was directed by Samuel Roland. After a two week professional run, it was adapted for performances by members of the then-striking International Garment Workers' Union as an entertainment for its members. Because Roland was associated with left-wing causes, he was asked by ILGWU president David Dubinsky to withdraw. The better-known ILGWU production was directed by Charles Friedman and choreographed by Benjamin Zemach. It opened on November 27, 1937 at the Labor Stage Theatre and then transferred to the Windsor Theatre on January 1, 1939, finally closing on June 22, 1940 after 1108 performances. The cast included Harry Clark. The production was directed by the African-American dancer Katherine Dunham.

The Roundabout Theatre Company produced a revival Off-Broadway at the Roundabout Stage 1 Theatre in 1978, which ran for 225 performances.

The Jewish Repertory Theatre presented a concert in 2003, to include songs and sketches from all versions of the show.

Pins and Needles was presented in the UK for the first time at the Cock Tavern Theater in Kilburn, London in November and December 2010. The production was directed by Rachel Grunwald and received positive reviews from the theatre press.

New material was frequently introduced during the run of the show; the following list, though by no means complete, is representative of the changes:

Scene 2
•"Why Sing of Skies Above?" (Sing Me a Song of Social Significance)
Boys: Girls:

The Women's Auxiliary assembles to unveil the statue of a famous general on his birthday. In the middle of a stirring address by Mr. Warmonger, the general, comes to life and does as he has always done: set man against man. When he resumes his granite self, he leaves behind him a chastened and thoughtful group.

Scene 1
•"It's Not Cricket to Picket" Solo, Company 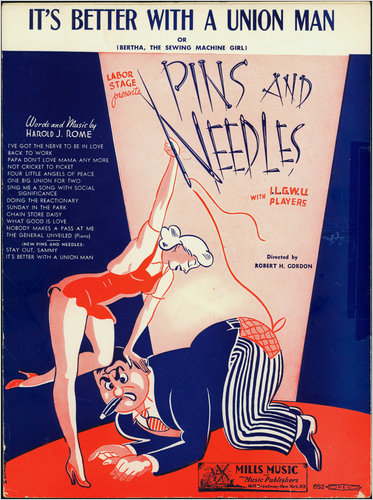