As Ken Hill rummaged through a used bookstore, he picked up a copy of Gaston Leroux's Phantom of the Opera novel and eventually produced it as a stage musical. The show started off as a production at Morecambe Pier as the first staged musical version, but was also first staged when Hill was working as Director of Productions for the Newcastle Playhouse.[citation needed] This first production was produced at The Duke’s Playhouse in Lancaster on July 26, 1976, where it proved to be a hit. It was directed by John Blackmore, designed by Clare Lyth, with musical direction by Gary Yershon.[citation needed] It differed from the later version of Ken Hill’s musical, in having a modern musical score by Ian Armit (who also worked with Hill on his production of The Curse of the Werewolf) in addition to excerpts from the opera Faust by Charles Gounod.

In 1984, Hill revived his musical version of The Phantom of the Opera. This time though, he wanted to add the kind of music that would have been heard at the Opéra Garnier in the late 19th century. Consequently he discarded the modern score by Ian Armit and wrote original English lyrics that told Gaston Leroux’s tale. By placing them to opera arias by Gounod, Offenbach, Verdi, Weber, Mozart, Donizetti, and Boito, he created a musical that reflected the era in which the original novel was written. This updated version of The Phantom of the Opera was produced in a joint production by the Newcastle Playhouse and the Theatre Royal Stratford East, and premiered at the Newcastle Playhouse on April 3, 1984, before shortly moving to the Theatre Royal Stratford East.[citation needed] In between, the show had two very brief runs at the New Tyne Theatre in Newcastle and the Grand Theatre in Wolverhampton - neither of those productions did very well.[citation needed] When the show got the Theatre Royal Stratford East, Sarah Brightman, who created the role of Christine in the Lloyd Webber version, was famously asked to perform the role of Christine in the 1984 cast but she turned it down, leaving the role for the opera singer Christina Collier.

Andrew Lloyd Webber, who at the time was married to Brightman, and Cameron Mackintosh attended a performance of Ken Hill’s Phantom of the Opera at the Theatre Royal Stratford East. Prompted by the good reviews, they approached Hill about the possibility of their collaborating on developing a grand scale version of his Phantom in the West End, and offered to produce it. In fact, Hill and Lloyd Webber had worked together earlier on a revival of Joseph and the Amazing Technicolor Dreamcoat at the Winchester Theatre. Lloyd Webber and his producer, Cameron Mackintosh, had been highly enthusiastic when they broached Hill about his Phantom of the Opera. But in the end, Lloyd Webber chose to pursue the musical without Hill.

Phantom of the Opera then emerged on the other side of the Atlantic in 1987 for its American premiere in St. Louis at the Repertory Theatre of St. Louis. This production starred Sal Mistretta as The Phantom - his performance won him the St. Louis Theatre Critics Award. A second US production was mounted in 1988 in San Francisco at the Theatre in the Square, produced by Jonathan Reinis.

The productions of Phantom of the Opera in St. Louis and San Francisco were so successful that Hill was asked to mount a national tour of the United States. Jonathan Reinis (who later produced Ken Hill’s The Invisible Man in London) formed Phantom Touring Company Inc. who acted as the producers for the tour, along with Electric Factory Concerts. The tour began in 1989, with musical arrangements and designs by the original Newcastle Playhouse team. It performed for a few years to packed houses all over America, travelling to approximately 110 cities, and grossing a total of $72 million.

In 1991, Phantom of the Opera returned to the United Kingdom where it embarked on a national tour and then transferred to London’s West End. It opened at The Shaftsbury Theatre on December 18, 1991, with a similar cast to the 1984 production - Peter Straker was The Phantom and Christina Collier as Christine. But despite positive reviews, the West End production did poorly at the box office and was forced to close earlier than expected, on April 11, 1992. However, the production was nominated for two Olivier Awards for Best New Musical and Best Director of a Musical, the latter of which placed Ken Hill against Simon Callow and Judi Dench.


Act I
Welcome Sir I'm So Delighted - Debienne, Remy, Faust, Mephistopheles, Richard, Raoul, Jammes
Accursed All Base Pursuit Of Earthly Pleasure - Faust
How Dare She - Raoul
Late Last Night I'm In The Cellars - The Groom
All Of My Dreams Faded Suddenly - Christine
While Floating High Above (Music: Bizet, The Pearl Fishers) - The Phantom
She Says She's Got The Nodules - Faust, Carlotta, Richard, Remy, Jammes, Debienne, Christine
What Do I See - Christine (as Carlotta)
To Pain My Heart Selfishly Dooms Me (Music: Offenbach, Les contes d'Hoffmann) - The Phantom, Raoul, Christine

Act II
The Entr'Acte
Ah! Do I Hear My Lover's Voice? - Faust, Christine
No Sign! I See No Sign! - Debienne, Richard, Raoul, Remy, Dominique, Faust, Jammes, Madam Giry
Somewhere Above The Sun Shines Bright - Christine
Born With A Monstrous Countenance - The Persian
In The Shadows, Dim And Dreary - Raoul, The Persian
'What An Awful Way To Perish - Faust, The Persian, Madam Giry, Richard, Jammes, Raoul
The Final Drama
Ne'er Forsake Me, Here Remain - The Phantom
Ne'er Forsake Me, Here Remain (Reprise) - The Phantom, Christine
He Will Not Go Without A Friend - Company 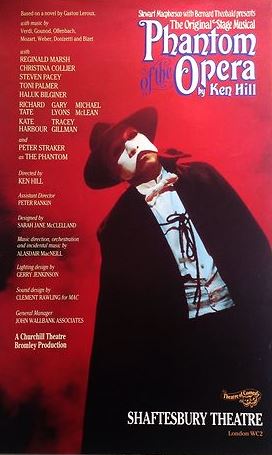 Type de série: Original London
Théâtre: Shaftesbury Theatre (Londres - Angleterre) Durée : 3 mois 3 semaines Nombre : 131 représentationsPremière Preview : mercredi 18 décembre 1991Première : mercredi 18 décembre 1991Dernière : samedi 11 avril 1992Mise en scène : Ken Hill • Chorégraphie : Avec : Peter Straker (The Phantom of the Opera) / Christina Collier (Christine Daae) / Steven Pacey (Raoul) / Reginald Marsh (Richard) / Toni Palmer (Madam Giry) / Tracy Gillman (La Carlotta – Dominique - Chorus Girl) / Michael McLean (Faust) / Gary Lyons (Rémy) / Haluk Bilginer (Mephistopheles - The Persian) / Kate Harbour (Jammes) / Richard Tate (Debienne – Groom – Gravedigger - Old Man – Mauclair - Priest) / Jacqueline Barron (Lisette - Lady In Box) / Quentin Maclaine (First Stage Hand) / Richard Shilling (Second Stage Hand)Commentaires : This production was nominated for two of the most prestigious Olivier Awards (equivalent of the Broadway Tony Awards) for Best New Musical (it was one of only two shows nominated!) and Best Director of a Musical, the latter of which placed Ken Hill against Simon Callow and Judi Dench.
Ken Hill’s comedy musical predated Andrew Lloyd Webber’s version by two years. In fact, it was said that the 1984 production at the Theatre Royal, Stratford East was the inspiration for Lloyd Webber’s later world-wide success. In this version the music is provided by Verdi, Offenbach, Gounod and the like, with irreverent lyrics by Ken Hill. From the opening when the ballet mistress misses her step and shouts “Shit”, to the finale where the dying Phantom gasps enough breath for an overlong swansong, this is clearly a very different show to the Lloyd Webber one. This is a camp journey via an enormous codpiece on Faust’s tights, and a chandelier that collapses on top of the soprano (“Well that’s cured her nodules”). Comparing the two versions of the story was said to be choosing between cod and chips and smoked salmon - both very tasty dishes. It had a four month run.En savoir plus sur cette version