PETER PAN - A Musical Adventure first saw light of day in Denmark, at the International Musical Of The Year in 1996, where it won two top awards for Best Song (WHEN I KILL PETER PAN performed by the late Denis Quilley) and The Orchestra's Award (chosen by the orchestra who performed the short-listed works).

In 1999 it was seen in a full production at Det Ny Teater in Copenhagen, performed in Danish.

Under the direction of Julia McKenzie and Jonathan Butterell a staged concert, with the BBC Symphony Orchestra, was produced as a one-off event at the Royal Festival Hall in 2001 - which was broadcast on BBC Radio 3 - starring John Thaw as Captain Hook, Joe MacFaddden as Peter Pan, Jenna Russell as Mrs Darling, and Sheila Hancock as the Storyteller.
The performance also boasted a first in that Wendy, Michael and John were played by three real-life siblings, Laura Michelle Kelly and her brothers Jorim and Nathan.

A fuller semi-staged version, with the London Symphony Orchestra, was mounted at the Royal Festival Hall over Christmas 2002 starring Richard Wilson and James Gillan, with Suzannah York as the Storyteller and Lottie Meyer as Wendy.

That same winter it was also seen for the first time in the USA, at the Prince Theatre in Philadelphia.

The show received it`s first fully-staged British production at Birmingham Repertory Theatre in December 2007, where it was directed by Rachel Kavanaugh, designed by Peter McKintosh and choreographed by Jenny Arnold.
The cast included David Birrell as Captain Hook, Peter Caulfield as Peter Pan, Gay Soper as the Storyteller and Gina Beck as Wendy.
This version was revived for Christmas 2008 at the West Yorkshire Playhouse, where David Birrell reprised his role as Hook and James Gillan, Amy Lennox and Alwyne Taylor assumed the roles of Peter Pan, Wendy and the Storyteller, with Martin Callaghan as Smee. It is this cast that have now been immortalised on the CD recording. 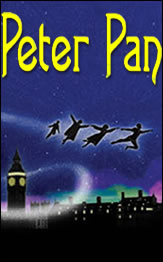