Jacob Bray is longing to have his opera performed, and things look promising when the star soprano,Nancy Gibbs sings extracts to her wealthy lover, Lord Ranelagh, and he agrees to put up the money. During rehearsals Jacob falls in love with Nancy, and this soon becomes an open secret in the theatre world, and when word gets to Lord Ranelagh he asks Nancy to pull out of the performance. She refuses but at the last moment hears that Ranelagh has been injured in a riding accident, and informs Jacob that her love for Ranelagh must come before the opera. Faced with losing both his love and the production of his opera, a distraught Jacob is saved when young Mary, the backstage milliner, is able to step in, take over the leading role and lead everything to a happy ending.

Produced in London during World War II with Tauber as its star, the work seemed a beautiful if somewhat dated entertainment, very pretty but no threat to Strauss, Lehar, or Kalman, its sensibilities and characterizations more rooted in 19th century stage conventions than in anything contemporary. The music is lyrical and very romantic, but the story would have seemed trite in 1890, and at the center of it all is Tauber as Jacob Bray, the professor of music and philosophy torn between two women. His singing is gorgeous, and the music is the best part of Old Chelsea -- warm, lively, and poignant -- but one must ignore the characters, who are as predictably "British" (in the theatrical sense) as those found in the worst vaudeville show. This release is taken from a British radio transcription, with a narrator somewhat awkwardly walking us through each change of scene. Tauber makes a spectacularly alluring tenor star, and this work, like his own, offers a warm and touching glimpse of his art during a period of his career that isn't remotely as well documented as his work in Germany and Austria between the wars. Charles Hawtrey (who became familiar around the world 20 years later in the cast of the Carry On movies) and Betty Percheron have a very lively and funny duet, and the choruses are lyrical and ravishingly romantic; Tauber and Nancy Brown also share several lovely and poignant duets. The radio performance of Old Chelsea is followed by four songs from an August 1947 Tauber BBC recital, performing material by Lalo, Grieg, and Weber. As Tauber died the following year, these recordings offer a glimpse of his singing near the end of his life.

This had been on a provincial tour for some time, including a Christmas season at Edinburgh, and despite its great success outside London, the West End audiences were polite rather than enthusiastic. Tauber had a magnificent tenor voice, but he was rather portly, had a heavy accent in his spoken dialogue and was not a very impressive actor. Provincial audiences adored him, but this show only managed a two and a half month run, ending on May 1st after 95 performances before returning to its successful tour. It did return to the West End for one week in February 1944. 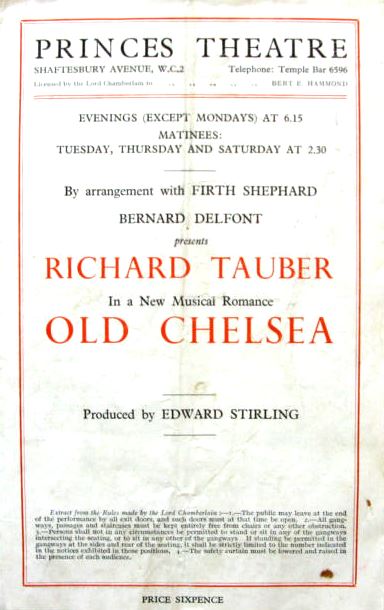