In the U.S. in the 1930s, a campaign parade is taking place to support Wintergreen for President. John P. Wintergreen has been nominated for President and Alexander Throttlebottom has been nominated for Vice President, but he is of such little importance no one can remember who he is. Politicians meet in a hotel room to devise a campaign platform, and when they ask the chambermaid what she cares about, she first says "money," then "love" when pressed further. The men decide that Wintergreen's platform will be "love;" they'll have a pageant to select the most beautiful girl in the United States, and Wintergreen will fall in love and marry her.

The pageant begins in Atlantic City, New Jersey, and the contestants wonder, Who is the Lucky Girl to Be? The photographers assure them that even if they do not win, they will surely be loved (The Dimple on My Knee). Wintergreen is getting nervous about marrying a girl he doesn't know. While the girls are at the final judging, he confides in Mary Turner, the sensible young woman running the pageant. He does not want to marry a girl just because she's beautiful; he wants a wife who will make a good home for him and his future children. Mary shares her corn muffin with him. Wintergreen tells Mary that he'd rather marry her than any of the girls in the contest. He kisses her, and she agrees to marry him. The judges of the pageant announce that Diana Devereaux, a beautiful southern girl, has won the contest, but Wintergreen declares that he loves Mary Turner. When he gives some of Mary's extraordinary corn muffins to the judges, they agree that John and Mary are meant to wed (Because, Because).

Outside Madison Square Garden in New York City, at a rally for Wintergreen, the campaigners declare that Love is Sweeping the Country. Inside, where politicians are speaking in favor of Wintergreen, a wrestling match is going on just below the speakers' platform as Alexander Throttlebottom tries to explain to the organizers that he's the candidate for Vice-President. Wintergreen proposes to Mary onstage, as he has in forty-seven states before. She accepts again, and Wintergreen sings the campaign song to her, Of Thee I Sing.

On election night, Wintergreen wins by a landslide. Inauguration day arrives, which is also Wintergreen's wedding day. As his inaugural address, Wintergreen bids goodbye to the girls he used to know (Here's a Kiss for Cinderella). The Chief Justice presides over the wedding ceremony, and just after he has pronounced John and Mary man and wife, Diana Devereaux interrupts the proceedings. She is serving Wintergreen with a summons for breach of promise. She insists she is the one he should have married (I Was the Most Beautiful Blossom). The Supreme Court rules that Mary's corn muffins are more important than justice in this matter, and Diana angrily leaves to tell her story across the nation. Wintergreen leads the Supreme Court and spectators in a chorus of Of Thee I Sing.

John and Mary settle down to business in the White House. Her "desk," back-to-back with his, is a fully loaded tea-table. Their secretaries greet each other "Hello, Good Morning." Alexander Throttlebottom, now Vice-President, sneaks into the White House with a tour group. When a guide tells him that the Vice-President's job is to preside over the U. S. Senate, Throttlebottom eagerly dashes off to the Capitol. Wintergreen's fellow party members inform him that Diana Devereaux is gaining support across the nation. Wintergreen holds a press conference and tells the reporters that his love for Mary is the only thing that matters (Who Cares?). The French ambassador unexpectedly arrives (Garçon, S'il Vous Plaît). He has a surprise for Mr. Wintergreen: Diana is "'The Illegitimate Daughter' of the illegitimate son of the illegitimate nephew of Napoleon." He insists that Wintergreen annul his marriage and marry Diana to right his grievous offense against France. Everyone agrees that Wintergreen should be impeached for breach of promise (We'll Impeach Him), but John and Mary do not care, since they have each other (Who Cares?" (Reprise)).
Throttlebottom has found the Senate, and the party members inform him that he will soon be President. He is very excited and goes into the Senate Chamber to preside, beginning by taking "The Roll Call." The resolution on the impeachment of the President is brought up, and the French Ambassador and Diana mournfully insist that she was Jilted. Mary saves the day when she announces that she is pregnant (Who Could Ask For Anything More?). The senators refuse to impeach an expectant father, and Wintergreen declares that Posterity is just around the corner. The French Ambassador informs Wintergreen that by not marrying Diana, he has contributed to France's declining birth rate. He demands the Wintergreens' baby as a replacement for the one they have "taken" from France. John refuses, and the ambassador walks out.
In the Yellow Room of the White House, guests are arriving bearing gifts for the baby (Trumpeter, Blow Your Horn). Wintergreen is nervously awaiting the baby's birth when the French Ambassador arrives with a final message from France: surrender the baby or France will sever diplomatic relations with the U.S. The Supreme Court justices, who have the duty to determine the sex of the baby, announce that twins have been born, a boy and a girl. The French ambassador is even more wounded by this proclamation: France has lost two babies instead of one! Diana mournfully joins him, and Alexander Throttlebottom arrives bearing sweaters for the babies. The French Ambassador is about to declare war when Wintergreen has a brilliant idea: according to Article Twelve of the Constitution, when the President of the United States is unable to fulfill his duties, his obligations are assumed by the Vice-President! The ambassador calls Wintergreen a genius, and Throttlebottom is ecstatic as they pass Diana over to him. Servants wheel a large bed into the room, where Mary sits with the babies. Wintergreen leads everyone in proclaiming, "Of Thee I Sing."

The Gershwins and George S. Kaufman had collaborated on a satirical musical in 1927 entitled Strike up the Band, which played in Philadelphia. The show concerned a cheese manufacturer who sponsors a war against Switzerland because it will be named after him. A version of Strike Up the Band, with the book altered by Morrie Ryskind, played on Broadway in early 1930. Much of the satire was replaced in the new version by silliness, leading Ryskind to recall, "What I had to do, in a sense, was to rewrite War and Peace for the Three Stooges."

Later that year, Kaufman and Ryskind conceived a new musical focusing on satire about rival political parties battling over a new national anthem. The Gershwin brothers agreed to write the score, although they were scheduled to be in Hollywood writing songs for the film Delicious. Kaufman and Ryskind soon realized that their concept did not provide sufficient plot for a musical. They crafted a libretto inspired by the timeless battle of political idealism with corruption and incompetency, creating the first American musical with a consistently satiric tone. The writers and the cast were unsure of what the public's reception would be, prompting Kaufman's now-famous statement, "Satire is what closes on Saturday night."

Musical and dramatic analysis
Of Thee I Sing was the most musically sophisticated of the Gershwin shows up to then, inspired by the works of Gilbert and Sullivan and boasting a varied score including extensive recitative, choral commentary, marches, pastiches, elaborate contrapuntal passages, and ballads. Most songs were lengthy and included a large ensemble. In addition, as an integrated song-and-story production it produced fewer hit songs than many of the Gershwins' musicals. Ira Gershwin explained, "In the show there are no verse-and-chorus songs; there is a sort of recitative running along, and lots of finales and finalettos." Ira Gershwin recalled that the title song, inspired by the final phrase of "My Country, 'Tis of Thee", was somewhat controversial among the production staff. "When we first played this sentimental political campaign song... there were objectors who thought that juxtaposing the dignified 'of thee I sing' with a slangy 'baby' was going a bit too far. Our response was that, naturally, we'd replace it with something else if the paying audience didn't take to it. Opening night, and even weeks later, one could hear a continuous 'Of thee I sing, baby!' in the lobby at intermission time." The music was "employed throughout in what was unquestionably the most closely integrated maner of any Broadway show to that time...Almost everything ...was created with a skill that had rarely been equaled in the musical comedy theatre."

Of Thee I Sing was the first American musical with a consistently satirical tone. Congress, the U.S. Supreme Court, the Presidency, and the democratic process itself were all targets of this satire, prompting original stars William Gaxton and Victor Moore to wonder if they would face government repercussions for their portrayals of President Wintergreen and Vice President Throttlebottom. Specific political parties are not identified in the musical, as Kaufman and Ryskind believed that absurdity was bipartisan in Depression-era politics.

Productions
The original Broadway production, directed by Kaufman, opened at the Music Box Theatre on December 26, 1931 and ran for 441 performances. The cast included William Gaxton as John P. Wintergreen, Lois Moran as Mary Turner, Grace Brinkley as Diana Devereaux, Victor Moore as Alexander Throttlebottom and George Murphy as Sam Jenkins. It was produced by Sam H. Harris. Sets were designed by Jo Mielziner, costumes by Carles LeMaire, and dances staged by Georgie Hale. It was Gaxton and Moore's first comedic pairing; they would collaborate on six more Broadway musicals, including Anything Goes. The orchestrations were by Robert Russell Bennett, William Daly (including the "Overture"), and Gershwin ("Hello, Good Morning"). Of Thee I Sing was the longest-running Gershwin show during George Gershwin's lifetime.

There were Broadway revivals in 1933 at the Imperial Theatre and in 1952 at the Ziegfeld Theatre, both directed by Kaufman. A concert production of Of Thee I Sing was mounted by Ian Marshall Fisher's Lost Musicals series at the Barbican Centre in London in August 1996. Fisher's series examines the Gershwins' lesser known works (as well as others) and has been based at London's Royal Opera House and Sadler's Wells.[6] The musical was presented in May 2006 as part of the New York City Center Encores! staged concert series. Directed by John Rando and choreographed by Randy Skinner, the cast starred Victor Garber as John P. Wintergreen, Jefferson Mays as Vice President, Alexander Throttlebottom, and Jennifer Laura Thompson as First Lady.

*The campaign song "Wintergreen for President" includes parts of folk and patriotic songs such as Sousa's "Stars and Stripes Forever", and "Hail, Hail, the Gang's All Here." The song has been adopted by the Harvard University Band as a pep song, and is traditionally played at Harvard football games.
**The music introducing the French and their ambassador includes the opening bars of Gershwin's own "An American in Paris". 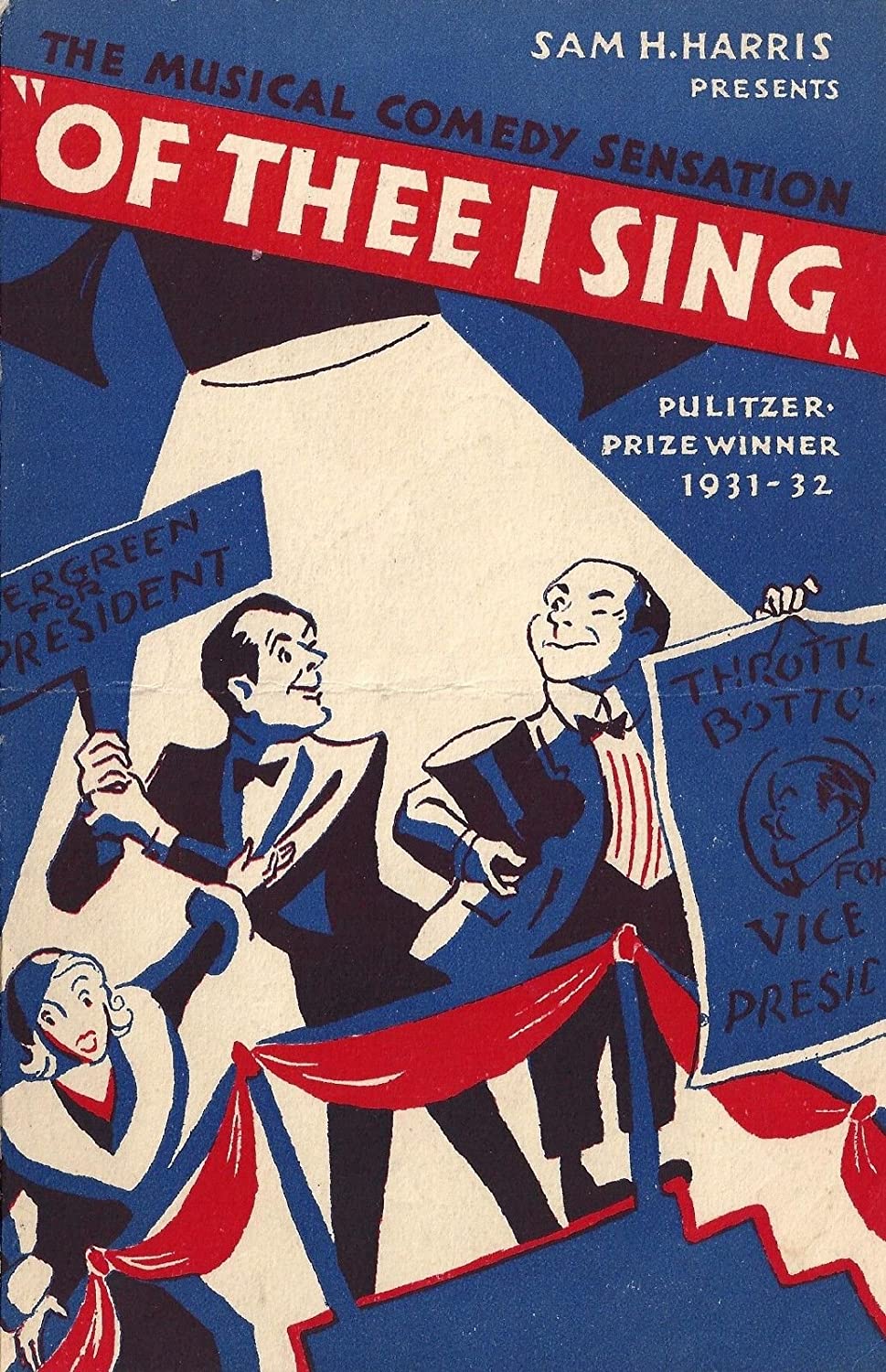 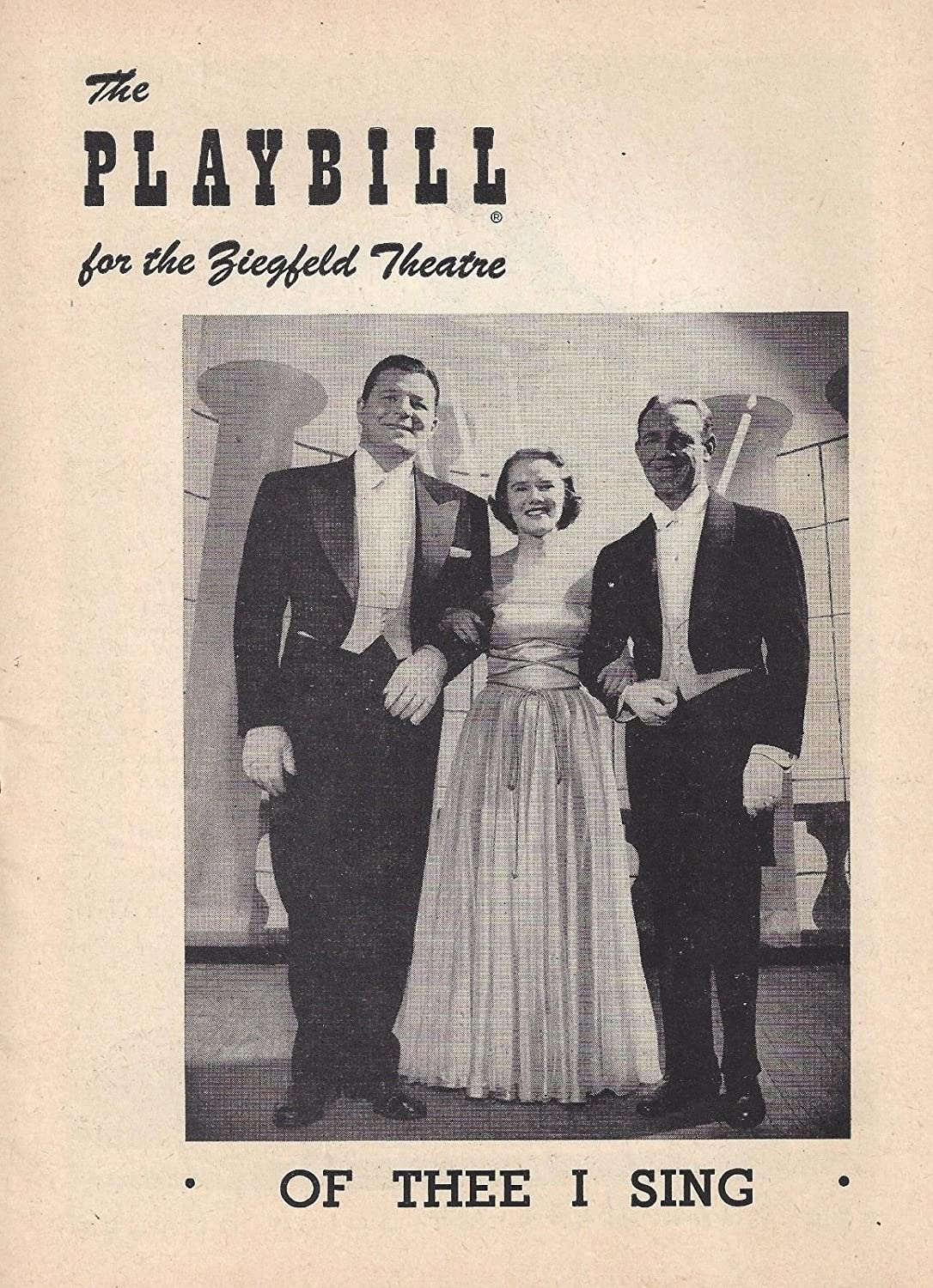