Evangline Edwards has left her finishing school in Switzerland and, encouraged to “experiment” by the school’s chemistry mistress, Miss Pratt, decides to explore the exciting world of sex and lose her virginity before settling down in England. Her “experiments” all fail! Attempted romances include Folies Bergère producer André de Croissant who wants to make her a star; Alexei, a Russian violinist who shows her the soul of Russian music; Count Mantalini of the Holy Roman Empire; Greek businessmen Constantine; and an unfortunate incident where she gets sold into a harem, guarded by Ali. Throughout it all, she is still a virgin. In the harem she meets Haidee, a kidnapped American, and when Ben Winthrop breaks into the harem to rescue Haidee, Evangeline persuades him to rescue her instead, and they run away together to the desert. But he is more interested in plumbing than in love-making. Back in Paris, Evangeline decides to join the Folies after all - enticed by the ten handsome chorus boys in the show. But they are all gay! She gives up and ends up back in Oxford in the vicarage garden with Reverend Pither and friends. As the others go in for tea, Evangeline remain behind. Along comes the new young handsome gardener Joe. They chat awhile, get closer and closer, and finally Joe offers Evangeline an apple. As she takes a bite from the apple, the curtain falls.

Based on the somewhat scandalous novel by James Lavers, this Cole Porter show was expressly created for London and was considered far too saucy for Broadway. It did not get a New York production for almost another 50 years. It was a huge success for Gertrude Lawrence. It was also the first musical with choreography credited to Agnes de Mille.

Cole Porter's biographers invariably list Kiss Me Kate, Anything Goes and Out of This World as his best scores, but Porter himself had one show that he always maintained was his own personal favorite: Nymph Errant. Porter’s choice is hardly known today, but in 1933 it represented the last word in “star vehicle” musical theatre writing. We presented it at Moon in 1998, and are delighted to bring it back as the opening show of our “Going Places” season. If ever a show “went places,” it’s Nymph Errantl

Nymph Errant was originally a wildly successful 1932 novel by James Laver, which chronicled the adventures of a young Englishwoman named Evangeline Edwards, who makes a rather eccentric tour of the world. British producer Charles Cochran was looking for a vehicle for Gertrude Lawrence - flamboyant, outrageous, and one of Broadway and London’s brightest stars. He thought Nymph Errant was a perfect fit.

Cochran quickly enlisted Cole Porter, who was coming off a string of Broadway hits including Gay Divorce, The New Yorkers and Fifty Million Frenchmen. Porter brought along his pal, raconteur/actor/director Romney Brent, to write the book and direct. The writing process proved particularly harmonious, as novelist Laver and librettist Brent joined Porter at his Paris town-house for writing sessions marked in equal measure by hard work, laughter, and champagne breaks.

Following an out-of-town run in Manchester (where the title song was added), Nymph Errant debuted to one of the biggest, most glamorous opening nights London had ever seen. “Experiment,” “How Could We Be Wrong,” and “It’s Bad For Me” were hailed as Porter’s newest hit tunes, but the showstoppers that night were Lawrence’s dazzling laundry-list of body parts, “The Physician” and Elisabeth Welch’s exhilaratingly abandoned delivery of “Solomon.”

Although there were some critical cavils about the extremely frank nature of the book, Gertrude Lawrence and the Porter score were met with acclaim, and the show settled in as London’s latest hit. After a few months, Lawrence’s financial and health problems (she was suffering from exhaustion) led to an early closing for Nymph. Fox Films planned, and then abandoned, a movie version, and a New York transfer never materialized. (Porter immediately followed Nymph with his biggest hit yet, Anything Goes.)

Nothing more was heard from Nymph Errant until a sequence from the show was performed in the 1968 Julie Andrews biography of Lawrence, Star! The American premiere was a workshop presentation by New York’s Equity Library Theatre in 1982. London saw a major concert evening of the songs in 1987 with Lisa Kirk, Alexis Smith, Kaye Ballard, Andrea McArdle, and, amazingly, Elisabeth Welch, singing the song she had introduced 55 years earlier, “Solomon.”

A new, rewritten version of Nymph Errant was performed at the Chichester Festival in England in 1999. It’s unlikely that the show will enjoy a Broadway production anytime in the near future, but the original 1933 version (which we are presenting tonight) still exists to remind us of Laver’s blithely ingenuous heroine and her amatory odyssey, Brent’s cunning wit and - of course - Porter’s supremacy at writing droll, emotional and gloriously melodic songs.


1.Overture (Orchestra)
2. Experiment (Mrs Pratt and chorus)
3. It's Bad for Me (Evangeline)
4. Neauville-sur-Mer (Chorus)
5. The Cocotte (Clarissa)
6. How Could We Be Wrong? (Evangeline and Chorus)
7. They're Always Entertaining (Chorus)
8. Georgia Sand (Henrietta and Chorus)
9. Nymph Errant (Evangeline and company)
10. Ruins (Chorus)
11. The Physician (Evangeline)
12.Solomon (Haidee)
13. Back to Nature with You (Evangeline and Ben)
14. Plumbing (Ben)
15. Si vous aimez les poitrines (Madeleine and chorus)
16. You're Too Far Away (Alexei)
17. Sweet Nudity (Girls and Boys - with soloists)
18. My Louisa (not used)
19. Cazanova (Henrietta)
20. Concert Finale: Experiment (The Company) 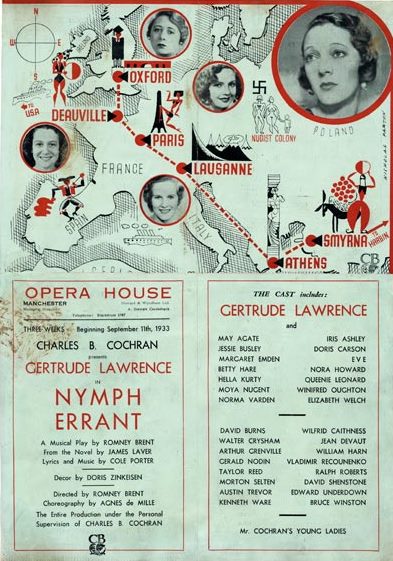 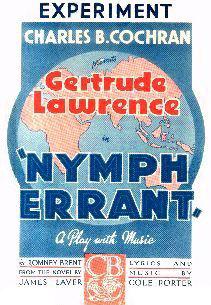 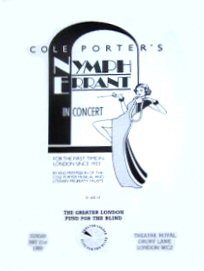 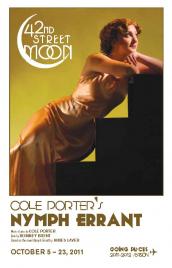 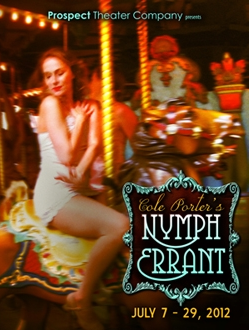