With extreme cleverness and a fair amount of luck, the poor street poet, Hajj, rises from the streets of Baghdad to being crowned as Emir by the Wazir of Baghdad. Meanwhile, the Wazir is desperately trying to find a wealthy foreign princess for the Caliph to marry. This plan hits a snag when the Caliph falls in love with Hajj's beautiful daughter, Marsinah, without the knowledge of Hajj. Thus, Hajj is helping the Wazir but risking losing his son-in-law. After a series of adventures, the Caliph and Marsinah are able to continue their love affair while Hajj is rewarded by gaining the affections of the Wazir's sexy widow, Lalume.

The musical was commissioned by Edwin Lester, founder and director of the Los Angeles Civic Light Opera, who conceived of a musical based on the 1911 play Kismet by Edward Knoblock. Lester had previously produced Song of Norway, with the same composing team, adapting the melodies of Edvard Grieg. For Kismet, the writers seized upon the melodies of Alexander Borodin, which had the right exotic flavor and lush melodies.

Kismet premiered in Los Angeles and then moved to San Francisco in the summer and autumn of 1953. A successful change during the tryouts was to transform the character of Hajj from being merely a beggar to also being a poet. Charles Lederer became producer as well as book writer. The production moved to Broadway on December 3, 1953, playing at the Ziegfeld Theatre. The director was Albert Marre, with choreography by Jack Cole and sumptuous settings and costumes by Lemuel Ayers. The original cast starred Alfred Drake as the poet Hajj, Doretta Morrow as his daughter Marsinah, Richard Kiley as the young Caliph of Baghdad, Henry Calvin as the Wazir, and Joan Diener as Lalume, the vampy wife of the evil Wazir. Bill Johnson later took over the role of Hajj, and Elaine Malbin the role of Marsinah. Columbia Masterworks Records recorded the original Broadway cast in late 1953; the recording was later reissued on CD by Masterworks Broadway Records.

The show opened on Broadway in the midst of a newspaper strike,[5] and since newspaper reviews were unavailable, the producers used television advertising to promote the show. The musical caught the popular attention and ran for a successful 583 performances, winning the 1954 Tony Award for Best Musical. The strike may have ultimately assisted the popularity of the show, since the reviews, arriving a few weeks after the opening, were not all favorable.[6] One critic, punning on the name of the composer Borodin, disparaged the score as "a lot of borrowed din." Walter Kerr wrote that "It's the sort of show that would sell its soul for a joke, and the jokes should be better at the price." William Hawkins, however, wrote that it was "noisy, spectacular, and vigorous. ... It is melodic and gay". Bloom and Vlastnik noted that it was the score that made the show successful, as the songs "Stranger in Paradise" and "Baubles, Bangles and Beads" were "huge hits on radio, television and records."

Kismet was even more successful in London's West End, enjoying a 648 performance run at the Stoll Theatre commencing in April 1955. The London production opened with the three stars of the Broadway cast, Drake, Morrow and Diener. They were subsequently replaced by Tudor Evans, Elizabeth Larner and Sheila Bradley, respectively.

Jettisoning the lush oriental context and physical production of the original, a restaging re-titled as Timbuktu! opened at the Mark Hellinger Theatre on March 1, 1978 and ran for 243 performances. This version, with a new book by Luther Davis, set the story in Africa, with minimalist settings. Plot emphasis was shifted, with Eartha Kitt starring in the role of Lalume.

The musical was revived in 2007 by the English National Opera at the London Coliseum and starred West End musical veteran Michael Ball and Alfie Boe.

Films and television
The musical was made into a Cinemascope film in 1955 by MGM, directed by Vincente Minnelli and starring Howard Keel as Hajj, Ann Blyth as Marsinah, Dolores Gray as Lalume, and Vic Damone as the Caliph. The quartet "This is My Beloved" was changed to a trio, because Sebastian Cabot, who played the Wazir, could not sing.

An Armstrong Theater television version was broadcast in 1967 starring Barbara Eden as Lalume, José Ferrer as Hajj, Anna Maria Alberghetti as Marsinah, and George Chakiris as the Caliph. The script was edited down to a 90 minute broadcast, but it cut few musical numbers despite the shorter run time.

Act 2
"Night of My Nights" – Caliph and Entourage
"Stranger in Paradise" (Reprise) – Marsinah
"Baubles, Bangles, and Beads" (Reprise) – The Caliph
"He's in Love!" (Reprise) – Entourage
"Was I Wazir?" – The Wazir of Police, Policemen and Guards
"Rahadlakum"* – Hajj, Lalume, Princess Zubbediya of Damascus, Princess Samaris of Bangalore, Three Princesses and Wazir's Harem
"And This Is My Beloved" – Marsinah, Caliph, Hajj and The Wazir of Police
"The Olive Tree" – Hajj
"Ceremonial of the Caliph's Diwan" – Diwan Dancers
"Presentation of Princesses" – Princess Zubbediya of Damascus, Ayah, Princess Samaris of Bangalore and Princess of Ababu
"Finale" – Ensemble and Hajj 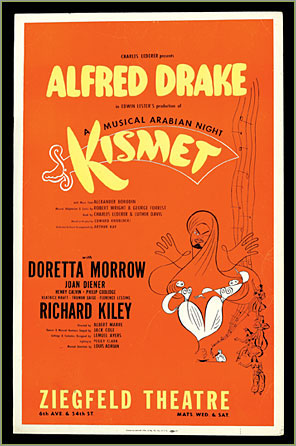 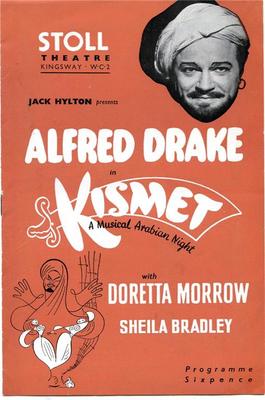 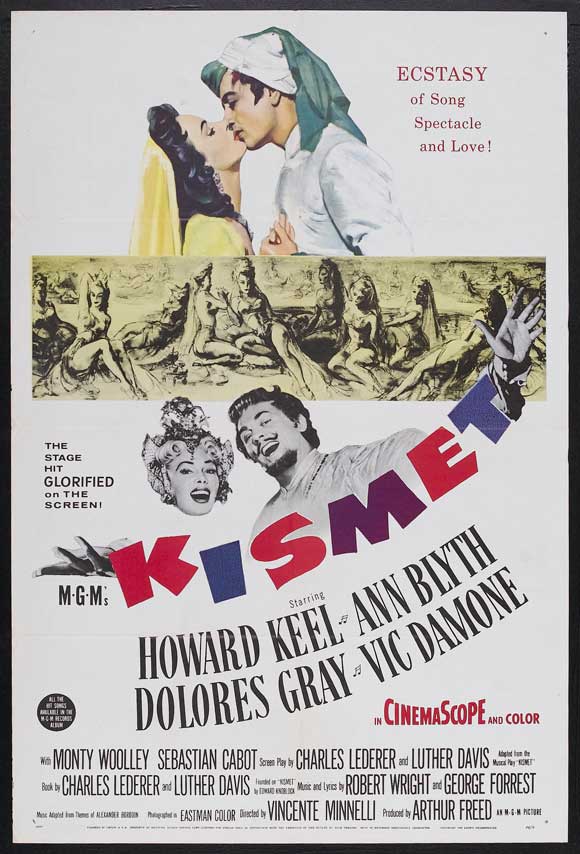 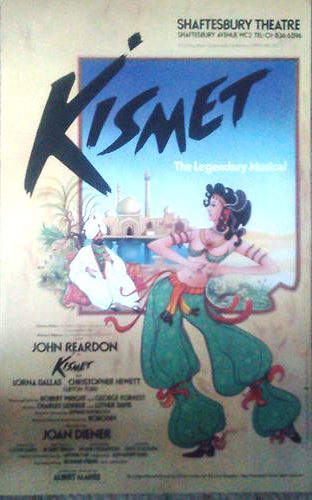 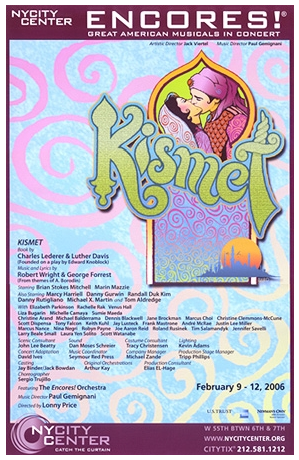 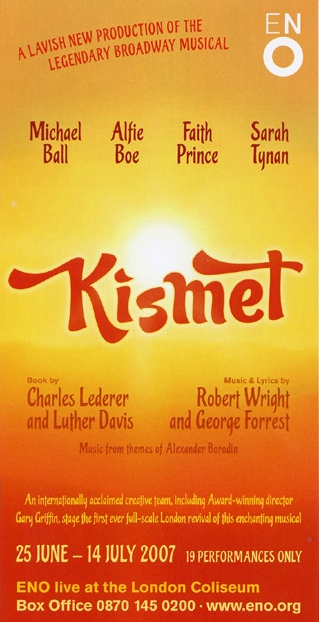