King Kong (1959) was a landmark South African jazz-influenced musical, billed at the time as an "all African jazz opera". Opening in Johannesburg on 2 February 1959 at Witwatersrand University Great Hall, the musical was an immediate success, with The Star newspaper calling it "the greatest thrill in 20 years of South African theatre-going". It "swept South Africa like a storm", touring the country for two years and playing to record-breaking multi-racial audiences, before being booked for a London production in 1961, by which time it had been seen by some 200,000 South Africans.

The music and some of the lyrics were written by Todd Matshikiza. The lyrics were by Pat Willams and the book by Harry Bloom. It was directed by Leon Gluckman with orchestration and arrangements by pianist Sol Klaaste, tenor saxophonist Mackay Davashe, alto saxophonist Kippie Moeketsi and composer Stanley Glasser.

The decor and costumes were designed by Arthur Goldreich, a Jewish communist architect and visual designer (who was later arrested during an apartheid clampdown).

King Kong had an all-black cast. The musical portrayed the life and times of a heavyweight boxer, Ezekiel Dlamini, known as "King Kong". Born in 1921, after a meteoric boxing rise, his life degenerated into drunkenness and gang violence. He knifed his girlfriend, asked for the death sentence during his trial and instead was sentenced to 14 years hard labour. He was found drowned in 1957 and it was believed his death was suicide. He was 36.

After being a hit in South Africa in 1959, the musical played at the Prince's Theatre in the West End of London in 1961. The liner notes for the London cast recording state: "No theatrical venture in South Africa has had he sensational success of King Kong. This musical, capturing the life, colour, and effervescence -- as well as the poignancy and sadness -- of township life, has come as a revelation to many South Africans that art does not recognize racial barriers. King Kong has played to capacity houses in every major city in the Union [of South Africa], and now, the first export of indigenous South African theatre, it will reveal to the rest of the world the peculiar flavour of township life, as well as the hitherto unrecognized talents of its people. The show, as recorded here, opened at the Princes Theatre, London, on February 23, 1961."

The song "Sad Times, Bad Times" was considered a reference at the time to the infamous South African Treason Trial in Pretoria, which had begun in 1956 and lasted for more than four years before it collapsed with all the accused acquitted. Among the defendants were Albert Luthuli (ANC president), secretary Walter Sisulu, Oliver Tambo and Nelson Mandela. According to John Matshikiza, King Kong′s first night was attended by Mandela, who at the interval congratulated Todd Matshikiza "on weaving a subtle message of support for the Treason Trial leaders into the opening anthem".

King Kong launched the international career of Miriam Makeba, who played the shebeen queen of the Back of the Moon, a shebeen of the time in Sophiatown.
The male lead was Nathan Mdledle of the Manhattan Brothers. There was a cast of 72.
Others in the cast were Hugh Masekela, Abdullah Ibrahim, Kippie Moeketsi and Thandi Klaasen, all of whom went on to have successful careers.
The London cast featured Nathan Mdlele and Peggy Phango, with Joseph Mogotsi, Ben Masinga, Stephen Moloi, Sophie Mgcina, and Patience Gowabe. 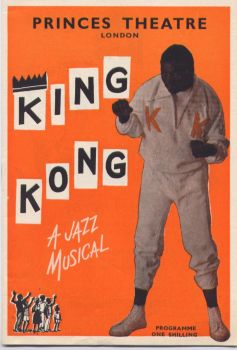