One of the most fascinating of 'real-life' British musicals, JOHNNY THE PRIEST told the story of a young vicar's attempt to improve the lives of teenagers living in a run-down London dockland. Acknowledged as one of the most innovative and inventive scores of the period, this terrific score with its superb big band arrangements by Gordon Langford emerges refreshened in Alan Bunting's immaculate sound restoration. Antony Hopkins' remarkable score catapulted the British musical into new territory, offering not only the best songs ever about ping-pong and wallpaper, but moments of great beauty.

Adapted from 'The Telescope' by R. C. Sherriff.

Johnny the Priest was the first and only musical to be written by the 'serious' composer Antony Hopkins. The librettist, Peter Powell, had directed Sherriff's play The Telescope at Birmingham, and co-directed Zuleika at the Saville in 1957. Johnny the Priest was his first attempt at book and lyrics. The director Norman Marshall was an intelligent choice, with a reputation for 'people's' theatre. His involvement showed the Players management meant business, just as they had when they brought Jean Meyer from France to direct their production of The Crooked Mile. The resident designer and co-director (with his partner Don Gemmell) of the Players Theatre, Reginald Woolley, had also designed The Crooked Mile. As the programme stated 'Johnny the Priest has, as you will see, presented even greater problems, and he walked around the dock area of London with a camera before starting work on the designs'. Woolley's designs tended to be gloomy, and there is no doubt that he was the perfect choice for Johnny the Priest.

• The theatre programme for Johnny the Priest carried an advertisement from Decca announcing the imminent appearance of the original cast recording. Unfortunately, Decca had Malcolm Arnold, not Hopkins, as the composer! Anyway, the recording, once made, was not issued, but put in the Decca archives. Only many years later was the recording issued in a limited edition.
• The 'teenagers' that make up the chorus are a patently bogus bunch, with thinly veiled RADA accents. The second female lead, Frances Buckeridge, is very East End until she has to go into her head voice, when she becomes very 'cut glass'
• Antony Hopkins does not list his score for Johnny the Priest among his works.
• Johnny the Priest was Jeremy Brett's last appearance in a musical play. It was Bunny May's only starring performance in a London musical (although he was one of the gaggle of young boys in Passion Flower Hotel a few years later). It was also Frances Buckeridge's one and only London lead. 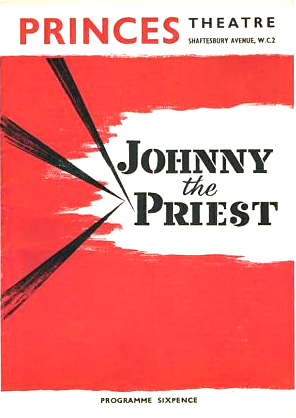