The legendary character of John Henry came alive in the vibrant singing and acting of Robeson but little else about the music-drama impressed the critics. FLOP

In the late nineteenth and early twentieth centuries, the respective legends of John Henry and Paul Bunyan came about. The former seems to have emanated from actual folk tales, while the latter’s image was created for a sales product. But ersatz legend or not, Paul Bunyan quickly became part of American folklore, and he and John Henry were in many ways the white and black counterparts of the kind of powerful men needed to cultivate the land of a new country. Their almost superhuman strength cut swaths through forests as they downed towering trees as if they were no more than mere twigs.

And from the perspective of musical theatre, both men were themselves brought down when muscular strength became less important with the dawn of the industrial age. When John Henry dares to compete with the steam engine, he’s not only defeated, he dies. In W. H. Auden and Benjamin Britten’s opera Paul Bunyan, the hero is necessary for the development of a new nation; but when the land is settled and the country has matured, his physical force is no longer needed and he fades away (the opera premiered on May 5, 1941, at Brander Matthews Hall at Columbia University and is in many respects the first concept musical; see Allegro for more information about this genre).

The episodic John Henry told the familiar story of the fanciful feats of its hero (Paul Robeson), who orders the sun to shine, hauls bales of cotton without breaking a sweat, builds the railroads, and erects the levees on the Mississippi River. John Henry loves Julie Anne (Ruby Elzy), but becomes briefly infatuated with the scarlet big-city woman Poor Selma (Myra Johnson). Due to a foolish misunderstanding on his part, John Henry becomes jealous of Julie Anne and falls prey to the machinations of the evil Man Named Sam (Joe Attles). And when John Henry pits his strength against the steam engine, he loses the war with the machine age and dies. His body is placed on a bier of cotton bales, and in death he’s joined by Julie Anne, who in grief has killed herself. Although John Henry dies, the story of his life takes on mythic proportion.


The critics were unanimous in their praise of Paul Robeson, whose powerful baritone and commanding physique were the perfect embodiment of the hero, but were less happy with the overall production. As a result, John Henry played for just seven performances and was the shortest-running musical of the season.

Richard Watts in the New York Herald Tribune said Robeson was “an actor of truly heroic presence” and “a sort of racial legend in himself,” and Burns Mantle in the New York Daily News said Robeson was the “perfect choice” for John Henry (had he sung until midnight, the “crowd would still have demanded more”). But despite their accolades for Robeson, the critics were less than impressed with Roark Bradford’s adaptation of his 1931 novel and the music composed by Jacques Wolfe. The libretto was found wanting with a number of “undramatic episodes” (per Watts), and Brooks Atkinson in the New York Times felt the book was “desultory,” “underwritten,” and “put together in perfunctory fashion.” Richard Lockridge in the New York Sun said the musical was “skimpy” and “static,” and seemed “too small” for its theme. As for the score, Mantle found it “nice” but “all in the same key and the same mood,” and Watts said it was “unexceptional.” But Atkinson said some of the music was “extraordinarily beautiful,” and suggested if it were performed in concert it “might be better appreciated.” The critics liked singer and banjo-player Joshua White (as Blind Lemon), who appeared throughout the evening as a kind of roving balladeer and sang five songs (including the first and second act opening numbers “I’m Singing about a Man” and “Where Did You Get Dem High Heeled Shoes?”).

Wilella Waldorf in the New York Post also indicated the evening was more in the nature of a concert with “stage trappings,” and felt she could “cautiously” recommend the musical only to those “who particularly enjoy Negro music and song.” But audiences who demand “more drama” with their music might be disappointed. She mentioned that the musical had employed two directors (during the tryout and preview performances Anthony Brown and then Charles Friedman were credited), but noted the opening night program didn’t credit anyone (Mantle said he had attended the first New York preview performance as well as the opening night, and at the preview Friedman had been officially credited with the direction).

Despite a general lack of enthusiasm for the score, a number of songs were singled out by the six critics, including “How Come I’m Born wid a Hook in My Hand,” “Got a Head Like a Rock,” “Sundown in My Soul,” “Careless Love,” and “I’m Born in the Country” (the latter was “triumphant,” according to Atkinson). Although Robeson later recorded a song titled “John Henry” (which wasn’t in the musical), it appears he never recorded any numbers from the score.

Robeson had appeared in the original 1924 production of Eugene O’Neill’s then-daring drama All God’s Chillun Got Wings about an interracial romance. In 1924 and 1925, he starred in two Broadway revivals of O’Neill’s 1920 drama The Emperor Jones, and was also in the 1933 film adaptation (Ruby Elzy, Robeson’s costar in John Henry, also appeared in the film). Robeson’s final New York performances were in the long-running 1943 Broadway revival of Othello (with José Ferrer and Uta Hagen) and a limited-run return engagement at City Center in 1945 (also with Ferrer and Hagan). He created the role of Joe for the 1928 London premiere of Show Boat and appeared in the 1932 Broadway revival of the musical. In 1936, he re-created the role for the film version (and with Hattie McDaniel introduced “Ah Still Suits Me,” a new Oscar Hammerstein II and Jerome Kern song written especially for the film).

Joe (Joseph) Attles, who portrayed Man Named Sam and Bad Stacker Lee, appeared in musicals during a six-decade period. He made his Broadway debut in the hit revue Blackbirds of 1928, which played for 518 performances, and his final show was the long-running 1976 revue Bubbling Brown Sugar, which ran for 766 showings. Besides John Henry, his other musical appearances included the 1953 and 1965 revivals of Porgy and Bess, Kwamina, and Tambourines to Glory. He also appeared in such Off-Broadway musicals as the 1964 revival of Cabin in the Sky, the 1964 and 1968 productions of Jerico-Jim Crow, and The Prodigal Son (1965).

Roark Bradford had earlier written Ol’ Man Adam an’ His Chillun, a 1928 collection of short stories upon which Marc Connelly based his 1930 Pulitzer Prize–winning play-with-music The Green Pastures. 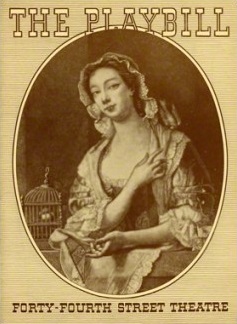