In 1925, while chasing a dream of fame and fortune by turning a Kentucky cave into a tourist attraction, Floyd Collins himself became the attraction when he got trapped 200 feet underground. Alone but for sporadic contact with the outside world, Floyd fought for his sanity and ultimately his life as the rescue effort above exploded into the first genuine media circus. Reporters and gawkers from across the country descended on the property, fueling the hysteria and manipulating the nation into holding its collective breath. This haunting musical - one of the most acclaimed in recent years - tells the transcendent tale of a true American dreamer.

The musical premiered at the American Music Theater Festival, Philadelphia, in 1994.

Floyd Collins opened Off-Broadway at Playwrights Horizons, New York City, on February 9, 1996 and closed on March 24, 1996 after 25 performances. Directed by Landau, the cast included Christopher Innvar as Floyd Collins, Martin Moran as Skeets Miller, Jason Danieley as Homer Collins, and Theresa McCarthy as Nellie Collins, as well as Cass Morgan, Brian d'Arcy James, Matthew (Matt) Bennett and Michael Mulheren. The musical won the Lucille Lortel Award for Outstanding Musical, and the 1995-1996 OBIE Award for its score. In 2003, a reunion concert was held at Playwrights Horizons with Romain Frugé as Floyd Collins and most of the original cast. 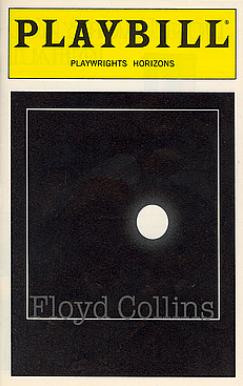