William "Buddy" Hobbs, a young orphan child, mistakenly crawls into Santa’s bag of gifts and is transported back to the North Pole. Years later, Buddy finds out that he's an ordinary human being and heads off to New York City in search of his father, Walter Hobbs.

He finds him, but Walter doesn't believe in the spirit of Christmas, nor do many other New Yorkers. This is a problem, because Santa's sleigh is powered by the people's belief in Christmas.

Faced with the harsh reality that Walter is on the naughty list and his half-brother, Michael, doesn’t even believe in Santa, Buddy is determined to win over his birth family and help New York City remember the true meaning of Christmas.


Elf is a musical based on the motion picture of the same name.

Broadway (2010-11)
After a 2009 workshop, the musical officially opened for a limited holiday engagement at the Al Hirschfeld Theatre on Broadway on November 14, 2010, following previews from November 2, 2010. Casey Nicholaw directed. The final performance took place January 2, 2011 after a run of 15 preview and 57 regular performances. A Broadway cast recording was released on November 1, 2011. Leading the original cast was Wicked and Jersey Boys star Sebastian Arcelus, who was joined by Broadway alums Amy Spanger and Beth Leavel.

Broadway revival (2012-13)
Following the success of the 2010 production, the musical returned to the Al Hirschfeld for a second holiday season beginning November 9, 2012, on a run through January 6, 2013. This new production featured a revised book and a brand new opening number "Happy All the Time."

West End production (2015-16)
A new production of the musical will open at the Dominion Theatre on October 24, 2015, for a 10-week run until January 2, 2016. This production will feature Ben Forster as Buddy and Kimberley Walsh as Jovie. There will be Gala Opening Night on 5 November 2015 in aid of Alzheimer’s Society.

Subsequent Productions
A separate production ran at The 5th Avenue Theatre for a limited engagement in Seattle beginning November 30, 2012, on a run through December 31.
The Canadian premiere of the production ran from November 20, 2012 to January 6, 2013 at Neptune Theatre in Halifax, Nova Scotia.
A production of the musical is currently running at the Paper Mill Playhouse. The run started on Nov 26, 2014 and is scheduled to run until Jan 4, 2015.

Differences from the film
The story is narrated by Santa Claus rather than Papa Elf. The story in the musical is said to have begun three years ago - rather than thirty years ago, like in the movie - so that there's no age limit on the actor playing Buddy. His real name is revealed to be William early in the film, while it is not revealed in the musical until he meets Walter, Emily, and Michael. The musical also adds a subplot about Michael's disbelief in Santa. 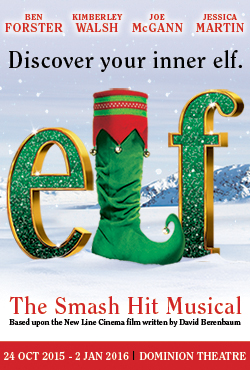