Criss Cross was a typical Fred Stone vehicle, and served as a follow-up to Stone and Jerome Kern’s Step ping Stones. The star’s specialty was acrobatic clowning, and he didn’t disappoint audiences with his trade mark rough-and-tumble antics, some of which he borrowed from his earlier musicals.

The story focused on Cinderella (Dorothy Stone), who for the remainder of the musical played Dolly Day, a young heiress who attends school in southern France and is in love with Captain Carleton (Roy Hoyer), a Prince Charming of sorts. And there were villains, too, including the Countess de Pavazac (Allene Crater Stone) and Ilphrahim Benani (Oscar Ragland), the latter of whom kidnaps Dolly and whisks her off to Algiers. Dolly’s rescue from a forced marriage to Benani was the show’s chandelier moment: piloted by Fred Stone (in the title role of Criss Cross), a prop airplane flew across the stage and hovered over Dolly while Criss lowered himself upside down on a rope ladder and helped Dolly climb aboard. From there, the plane proceeded to fly Dolly into the arms of her waiting captain.

The family show utilized fairy-tale-oriented themes and characters, and family was the operative word because the musical was another one of those Stone family affairs that served as a showcase for members of the clan, Fred, wife Allene (Crater) Stone, and their daughter Dorothy. Soon daughter Paula joined the ménage, and later daughter Carol appeared on Broadway. Paula coproduced the 1945 revival of Fred’s 1906 hit The Red Mill (which had featured Allene), and Dorothy starred in the production (and the company included Dorothy’s husband Charles Collins in a role especially written for the revival). Criss Cross began with an extraneous prologue set in Fable Land which served as an homage to Fred Stone himself. Many of the cast members were presented as characters from fairy tales (including Puss-in-Boots, Beauty, Humpty-Dumpty, Jack Horner, Raggedy Andy, Rose Red, Sinbad, and Cinderella), and from earlier Stone musicals there were characters he had originated (such as the Scarecrow in the 1903 production The Wizard of Oz), and all of his former creations wore masks in the star’s likeness.

Act 1
“Flap-aDoodle”
“Leaders of the Modern Regime”
“You Will – Won’t You?”
“In Araby With You”
“Travelogue”

Jerome Kern’s score was slightly disappointing and didn’t yield any evergreens, but “You Will—Won’t You?,” “In Araby with You,” and Fred Stone’s specialty “I Love My Little Susie” were well received.

The musical played for a profitable six months on Broadway, and two days after it closed began a national tour at Boston’s Colonial Theatre with all Stones present and accounted for.

J. Brooks Atkinson in the New York Times said the evening was a “whirl of dancing, buffoonery, tumbling and singing” by the three Stones and it set “a high tone for simple and pleasing entertainment.” The Tiller Sunshine Girls were “the most polished now to be seen on the musical stage,” and Kern’s “able” score dis tinguished Criss Cross “from pure circus entertainment” (Atkinson singled out the three above-cited songs). Fred Stone kept the show “clean” and “enjoyable,” indulged in tumbles down staircases as well as “hot” tangos, and even sported trick glasses that wept tears and a similarly tricked-up mustache “that bristles with defiance when properly coaxed.”

Time said the show had everything but humor. The book was “dull” and went on “at length,” but Fred Stone discovered “laughs that the lines themselves never even hinted at.” Otherwise, the dancers were “lively,” the costumes “gorgeous,” and the tunes “good.” Frederick F. Schrader in the Cincinnati Enquirer praised the “clean and wholesome” musical with its “spirited” dancers, “lovely” costumes, and Kern’s “espe cially pleasing” score, and noted that Fred Stone was Broadway’s “cleverest entertainer.” The Brooklyn Daily Eagle seemed to go into gush overload when it talked about “indulgent parent” Fred who “proudly” pushed “the delights of popularity upon his heir” Dorothy, who was “lovely with feet that are the possessors of more than their share of the world’s legerity” and “much” of the world’s “electric grace,” and who performed “cap tivating capers” with her father.

Variety reported the show cost in the vicinity of $100,000, and it was “problematical” just how long the musical could remain on Broadway. The show was “weak,” there was “little comedy” in the “dull” first act (and even the second was “none too brilliant”), and Fred Stone’s would-be comic “Flap-a-Doodle” didn’t “register many snickers even with a first-night audience ready to respond to anything.” But Kern’s score was “light and lilting,” there was “good” dancing, and the production was “colorful.” 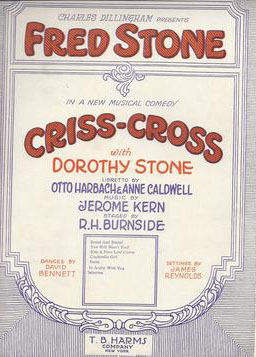