With this little work, Arthur Sullivan made his first entry into the world of comic opera. He had already completed his first operatic work during the early 1860's, but that work (The Sapphire Necklace or The False Heiress with libretto by H. F. Chorley) never reached the stage, and although the rights of publication were, at one point, assigned to the publisher, Metzler, the opera was never printed.

Sergeant Bouncer, an old soldier, has a scheme to get double rent from a single room. By day he lets it to Mr. Box (a printer who is out all night) and by night to Mr. Cox (a hatter who works all day). Whenever either of them asks any awkward questions he sings at length about his days in the militia.
His plan works well until Mr. Cox is, unexpectedly, given a day's holiday and the two lodgers meet. Left alone while Bouncer sorts out another room, they discover they share more than the same bed. Cox is engaged to the widow Penelope Ann Wiggins - a fate that Box escaped by pretending to commit suicide.
They try gambling Penelope Ann away until news arrives that she has been lost at sea and has left her fortune to her 'intended'. They then both try to claim her for themselves. Another letter arrives - she has been found and will arrive any minute. Now they both try to disclaim her! However, she doesn't appear personally, instead leaving a letter to inform them that she intends to marry a Mr. Knox! Relieved, Cox and Box swear eternal friendship and discover, curiously enough, that they are long-lost brothers…

The Moray Minstrels were an informal gathering of notable members of London society and the arts, including painters, actors and writers (all male), who were mostly amateur musicians. They would meet for musical evenings at Moray Lodge, in Kensington, the home of Arthur James Lewis (1824–1901), a haberdasher and silk merchant (of the firm Lewis & Allenby), who married the actress Kate Terry in 1867. The Minstrels would discuss the arts, smoke and sing part-songs and other popular music at monthly gatherings of more than 150 lovers of the arts; their conductor was John Foster. Foster, as well as the dramatist F. C. Burnand and many other members were friendly with young Arthur Sullivan, who joined the group. On one occasion in early 1865, they heard a performance of Offenbach's short two-man operetta Les deux aveugles ("The Two Blind Men"). After seeing another operetta at Moray Lodge the following winter, Burnand asked Sullivan to collaborate on a new piece to be performed for the Minstrels.

Burnand adapted the libretto for this "triumviretta" from John Maddison Morton's famous farce, Box and Cox, which had premiered in London in 1847, starring J. B. Buckstone. The text follows Morton's play closely, differing in only two notable respects. First, in the play the protagonists lodge with Mrs Bouncer; in Burnand's version the character is Sergeant Bouncer. This change was necessitated by the intention of performing the piece for the all-male gathering of the Moray Minstrels. Secondly, Burnand wrote original lyrics to be set to music by the 24-year-old Sullivan. The date and venue of the first performance was much disputed, starting in 1890, in duelling letters to The World, with Burnand and Lewis each claiming to have hosted it. Andrew Lamb has concluded that the run-through at Burnand's home on 23 May 1866 was a rehearsal, followed by the first performance at Lewis's home on 26 May 1866. A printed programme for the 23 May performance later surfaced, suggesting more than a mere rehearsal, but the composer himself supported the later date, writing to The World, "I feel bound to say that Burnand's version came upon me with the freshness of a novel. My own recollection of the business is perfectly distinct". George Grove noted in his diary of 13 May that he attended a performance of Cox and Box, which Lamb takes to have been an open rehearsal; however, Foster calls the performance at Burnand's house a rehearsal. The original cast was George du Maurier as Box, Harold Power as Cox, and John Foster as Bouncer, with Sullivan himself improvising the accompaniment at the piano.

Another performance at Moray Lodge took place eleven months later on 26 April 1867. This was followed by the first public performance, which was given as part of a charity benefit by the Moray Minstrels (along with Kate, Florence and Ellen Terry and others) for the widow and children of C. H. Bennett, on 11 May 1867 at the Adelphi Theatre, with du Maurier as Box, Quintin Twiss as Cox and Arthur Cecil as Bouncer, performing as an amateur under his birth name, Arthur Blunt. A review in The Times commented that Burnand had adapted Morton's libretto well, and that Sullivan's music was "full of sparking tune and real comic humour". The rest of the evening's entertainment included a musicale by the Moray Minstrels, the play A Wolf in Sheep's Clothing and Les deux aveugles. The opera was heard with a full orchestra for the first time on that occasion, with Sullivan completing the orchestration a matter of hours before the first rehearsal. The Musical World praised both author and composer, suggesting that the piece would gain success if presented professionally. It was repeated on 18 May 1867 at the Royal Gallery of Illustration in Regent Street. The critic for the magazine Fun, W. S. Gilbert, wrote of the 11 May performance: Mr. Burnand's version of Box and Cox ... is capitally written, and Mr. Sullivan's music is charming throughout. The faults of the piece, as it stands, are twain. Firstly: Mr. Burnand should have operatized the whole farce, condensing it, at the same time, into the smallest compass, consistent with an intelligible reading of the plot. ... Secondly, Mr. Sullivan's music is, in many places, of too high a class for the grotesquely absurd plot to which it is wedded. It is very funny, here and there, and grand or graceful where it is not funny; but the grand and the graceful have, we think, too large a share of the honours to themselves. The music was capitally sung by Messrs. Du Maurier, Quintin, and Blunt.

There were discussions about an 1867 professional production under the management of Thomas German Reed, but instead Reed commissioned Sullivan and Burnand to write a two-act comic opera, The Contrabandista, which was less well received. Cox and Box had its first professional production under Reed's management at the Royal Gallery of Illustration on Easter Monday, 29 March 1869, with Gilbert and Frederic Clay's No Cards preceding it on the bill. The occasion marked the professional debut of Arthur Cecil, who played Box. German Reed played Cox and F. Seymour played Bouncer. Cox and Box ran until 20 March 1870, a total of 264 performances, with a further 23 performances on tour. The production was a hit, although critics lamented the loss of Sullivan's orchestration (the Gallery of Illustration was too small for an orchestra): "The operetta loses something by the substitution... of a piano and harmonium accompaniment for the orchestral parts which Mr. Sullivan knows so well how to write; but the music is nevertheless welcome in any shape."

Subsequent productions
Cox and Box quickly became a Victorian staple, with additional productions in Manchester in 1869 and on tour in 1871 (conducted by Richard D'Oyly Carte, with the composer's brother Fred playing Cox), at London's Alhambra Theatre in 1871, with Fred as Cox, and at the Gaiety Theatre in 1872, 1873, and 1874 (the last of these again starring Fred as Cox and Cecil as Box), and Manchester again in 1874 (paired with The Contrabandista). There were also numerous charity performances beginning in 1867, including two at the Gaiety during the run of Thespis, and another in Switzerland in 1879 with Sullivan himself as Cox and Cecil as Box. Sullivan sometimes accompanied these performances. The cast for a performance at the Gaiety in 1880 included Cecil as Box, George Grossmith as Cox and Corney Grain as Bouncer. The first documented American production opened on 14 April 1879 at the Standard Theatre, in New York, as a curtain raiser to a "pirated" production of H.M.S. Pinafore. In an 1884 production at the Court Theatre, the piece played together with Gilbert's Dan'l Druce, Blacksmith (but later in the year with other pieces), with Richard Temple as Cox, Cecil as Box, and Furneaux Cook as Bouncer. This production was revived in 1888, with Cecil, Eric Lewis and William Lugg playing Box, Cox and Bouncer.

The first D'Oyly Carte Opera Company performance of the piece was on 31 December 1894, to accompany another Sullivan–Burnand opera, The Chieftain, which had opened on 12 December at the Savoy Theatre. For this production Sullivan cut the "Sixes" duet and verses from several other numbers, and dialogue cuts were also made. Temple played Bouncer and Scott Russell was Cox. It then was played by several D'Oyly Carte touring companies in 1895 and 1896. In 1900, the piece was presented at the Coronet Theatre with Courtice Pounds as Box. In 1921, Rupert D'Oyly Carte introduced Cox and Box as a curtain raiser to The Sorcerer, with additional cuts prepared by J. M. Gordon and Harry Norris. This slimmed-down "Savoy Version" remained in the company’s repertory as curtain raiser for the shorter Savoy Operas. By the 1960s, Cox and Box was the usual companion piece to The Pirates of Penzance. It received its final D'Oyly Carte performance on 16 February 1977.

Many amateur theatre companies have also staged Cox and Box – either alone or together with one of the shorter Savoy Operas. In recent years, after the rediscovery of the one-act Sullivan and B. C. Stephenson opera, The Zoo, Cox and Box has sometimes been presented as part of an evening of the three Sullivan one-act operas, sharing a bill with The Zoo and Trial by Jury. 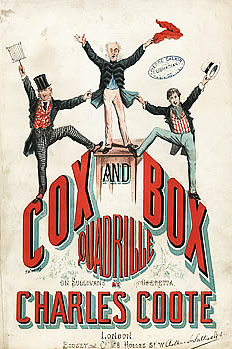