Blondel was one of the first musicals Tim Rice wrote outside the extraordinarily successful partnership with Andrew Lloyd Weber. Teaming up with the brilliant young composer Stephen Oliver, who had written the music for the RSC’s breathtaking adaptation of Nicholas Nickleby, they took on the legend of the twelfth century troubadour Blondel.

The musical follows the trials and triumphs of Blondel, an ambitious minstrel in King Richard The Lionheart's court desperately trying for a chart-topping song. Blondel and his long-suffering girlfriend Fiona undertake a mulit-nation search when King Richard is taken captive during the Crusades. They rescue him and return to England just in time to prevent the coronation of his shifty brother Prince John.

Tim Rice first envisioned the idea for a show about the Crusades in the early days of his partnership with Andrew Lloyd Webber. Andrew and Tim had done some work on it, entitling the project "Come Back Richard Your Country Needs You". It was performed as an oratorio at the City of London School in 1969 directed by Alan Doggett. Also in 1969 a single of the title song was recorded with Tim as lead vocalist and backed with the unrelated "Roll On Over The Atlantic". After this, however, the idea for a musical about the Crusades sank back into obscurity.

Tim Rice first met Stephen Oliver, who had composed for the opera and the RSC, when they both served on a panel at the Sydney Arts Festival in 1977. In 1982 they began collaboration to bring the idea of a musical about King Richard into a reality. Now titled Blondel, the show centered around Richard's minstrel, Blondel, who embarks on a quest to find his missing king . . . while at the same time trying to make it big as a pop singer and songwriter.


London Stage
Blondel opened in Bath on September 12, 1983 and soon moved to Manchester where it stayed for two weeks before moving to the newly-refurbished Old Vic on November 2. Lord Olivier spoke the prologue at a Gala performance on 8 November. The show remained at the Old Vic for eleven months before moving to the Aldwych on London's West End. Because of high production costs and decreasing revenues, Blondel closed in the Aldwych after only eight months.
Original Cast
• Blondel - Paul Nicholas
• Fiona - Sharon Lee-Hill
• Richard - Stephen Tate
• John - David Burt
• The Assassin - Chris Langham
• Leopold - Kevin Williams
• The Monks - Cantabile (group)
The London revival of the show opened at the Pleasance Theatre on 23 November 2006. The production saw the show revamped and rearranged by Tim Rice and director Patrick Wilde. Young composer Mathew Pritchard took Stephen Oliver's original score and completely rearranged the work, also adding new material. The story was sharpened, particularly in the second act, to produce a punchier (and funnier) version particularly well suited for an ensemble production.

Blondel - A monarchist and unappreciated musician waiting, rather frustratedly, for his big break.
Fiona - His girlfriend, a serf of the English court and English activist eight centuries ahead of her time.
King Richard the Lionheart - The courageous King of England.
Prince John - The power-hungry and ambitious Prince of England and heir to the throne.
The Assassin - A hired hand willing to kill anyone for the right price.
The Duke of Austria - Leopold, the ruler of Austria, and captor of King Richard.
The Monks - A group of historians who serve as narrators and commentators.
The Blondettes - Blondel's back-up singers. 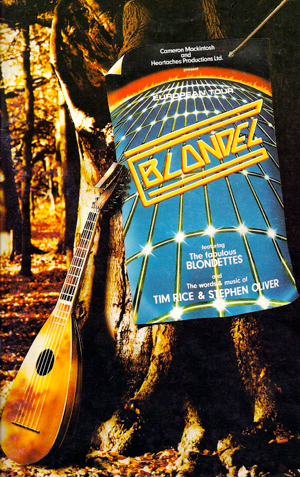 Type de série: Original
Théâtre: Old Vic (Londres - Angleterre) Durée : 2 mois Nombre : 87 représentationsPremière Preview : mercredi 02 novembre 1983Première : mercredi 09 novembre 1983Dernière : samedi 14 janvier 1984Mise en scène : Peter James • Chorégraphie : Anthony Van Laast • Avec : Paul Nicholas (Blondel), Stephen Tate (King Richard), David Burt (Prince John), Chris Langham (Assassin), Sharon Lee Hill (Fiona), Richard Bryan, Stewart Collins, Nicholas Ibbotson, Michael Steffan (Monks)Commentaires : The performance on 8 November 1983 was a Special Gala Performance staged in the presence of Her Majesty Queen Elizabeth, the Queen Mother.
Blondel was the opening performance of the newly refurbished Old Vic Theatre and was the first of that season's subscription season - an idea that the new owner, Ed Mirvish, had imported from his theatre in Toronto, Canada where he claimed that 85% of seats where sold in advance to subscribers.
Although man critics found the plot muddled and confused, the chorus of monks was a great success and the show did develop a kind of cult following. It was chosen to re-open the Old Vic after the theatre had undergone a major renovation under its new owner, the Canadian “Honest” Ed Mirvisch. It transferred to the Aldwych Theatre in January 1984.En savoir plus sur cette version 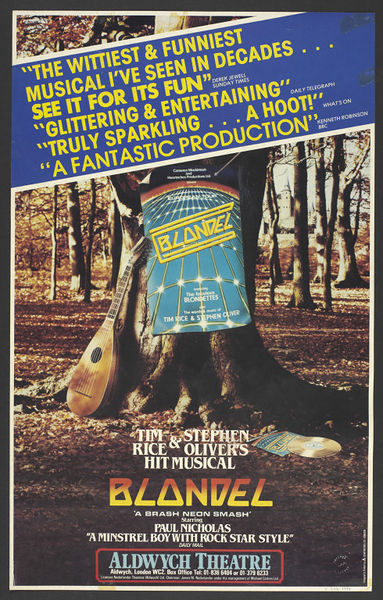 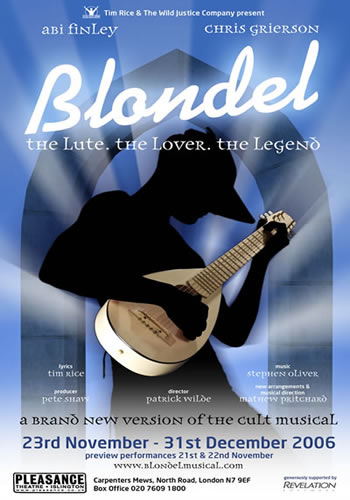 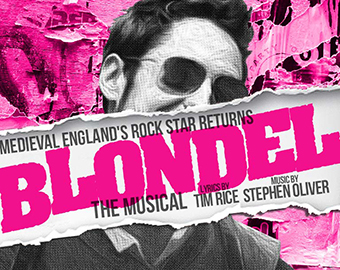