A hapless military school student becomes a hero of World War I in John Gray and Eric Peterson's two-man play with music.

The play premiered at the Vancouver East Cultural Centre in Vancouver, British Columbia on November 3, 1978. Peterson played 18 different characters, and Gray accompanied on piano and vocals. The original production toured across Canada, and also was staged in Washington, DC, both on Broadway and off-Broadway in New York City, at the Edinburgh Festival, in Los Angeles and at the Comedy Theatre in London. During the international tour, a second production, starring Cedric Smith with musical accompaniment by Ross Douglas, continued touring across Canada.

In 1998, Gray and Peterson revised the show, adding one new song and presenting events through the eyes of a much older Bishop recalling his wartime exploits. They again toured the new production across Canada.
The show was produced at the Soulpepper Theatre in August 2009.
In 2010, a second revision was made and was performed, with the original actors, at the Soulpepper Theatre [4] in Toronto from January 22 to February 27, 2010. In an interview prior to that production, Eric Peterson stated: "We've gone through radical recasting! From a 32 year old to a 62 year old as the actor who's going to be narrating the show. In a two man play like this, it has incredibly different resonance depending on who's telling that story. In many cases, we've taken some minor rewriting for the production we did when we were 52 and updated them and changed the ending. Now at 62 we're older than Bishop ever was in the play before."

In 2011 the show was performed as part of the repertory summer season at Frinton-on-Sea. The production was directed by Tom Littler. 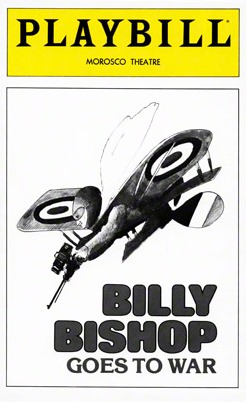 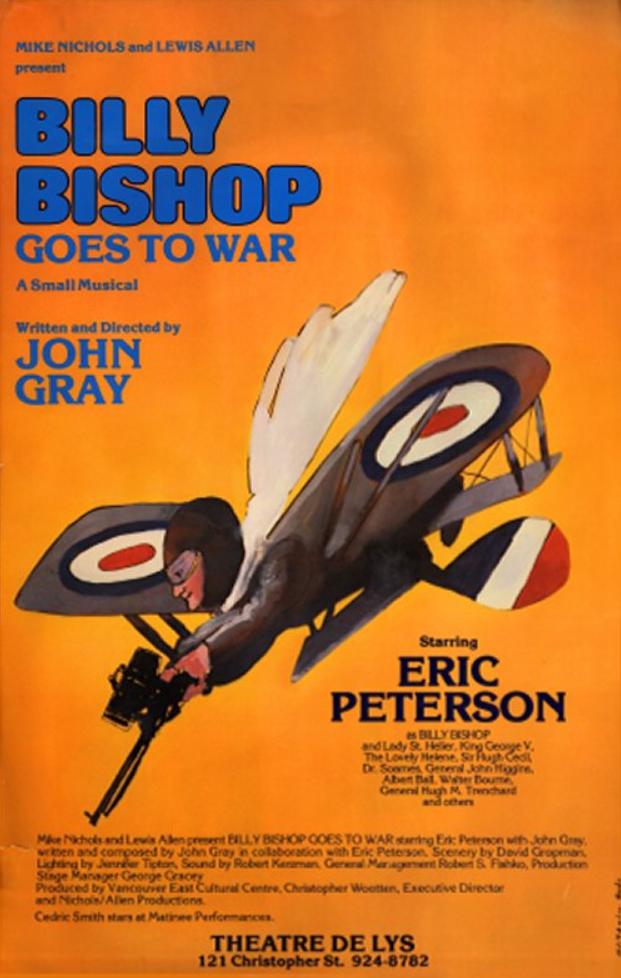 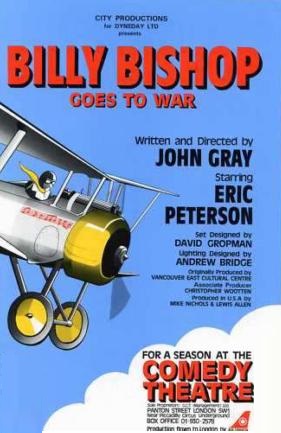 Type de série: Original London
Théâtre: Noel Coward Theatre (Londres - Angleterre) Durée : 4 semaines Nombre : 40 représentationsPremière Preview : mercredi 03 juin 1981Première : samedi 13 juin 1981Dernière : samedi 11 juillet 1981Mise en scène : John MacLachlan Gray • Chorégraphie : Avec : Eric Peterson, John MacLachlan GrayCommentaires : This was one of Canada’s most successful and popular shows, telling the life-story of Billy Bishop, the Canadian World War I fighter-pilot, officially credited with 72 victories, making him the top Canadian ace, and possibly the top ace of the British Empire. From his early dare-devil flights he ended up as an Air Marshal, with a VC, a DSO & Bar and a host of other awards and honours. Peterson played 18 different characters, and Gray accompanied on piano and vocals. The production began with a major tour across Canada, then played Washington, Broadway, Los Angeles, the Edinburgh Festival and this season in London. (It went on to have a continuing life and in 1998, Gray and Peterson revised the show, adding one new song and presenting events through the eyes of a much older Bishop recalling his wartime exploits. They again toured the new production across Canada.)En savoir plus sur cette version