While Huckleberry Finn continues his reckless, adventure-loving ways, his alcoholic and violent father, Pap, demands custody over the boy. Unable to prevent Pap from taking Huck, the Judge forces Huck to comply. Fearing for his life, Huck takes off on a raft down the Mississippi River. Along the way, he meets up with a runaway slave, Jim, who is trying to find his wife and children up North. Soon, Huck and Jim gain two new compatriots, the Duke and the King, who are really escaped convicts. After a series of adventures and reuniting with his best friend, Tom Sawyer, Huck discovers that Jim's slaveowner died and freed Jim in her will. Thus, Jim is free to find his wife and children on his own and Huck decides to move out West, where no one can civilize him.

Based on Mark Twain's classic 1884 novel, Adventures of Huckleberry Finn

The first productions were staged by the American Repertory Theater in Cambridge, Massachusetts in February 1984 and at the La Jolla Playhouse in San Diego, California, from June through July 1984.

After twenty-eight previews, a critically acclaimed[4] revival, directed and choreographed by Jeff Calhoun, opened on Broadway on July 24, 2003 at the American Airlines Theatre, where it ran for 67 performances. This production, staged by the Roundabout Theatre Company and Deaf West Theatre, was notable in that it featured both deaf and hearing actors performing together. About half the characters, including the leading role of Huck, were played by deaf or hard-of-hearing performers. All dialogue and lyrics in the production were both spoken or sung and signed, making the production equally accessible to hearing and deaf audiences. The character of Mark Twain (portrayed by Daniel H. Jenkins, who portrayed the role of Huck in the original Broadway cast) was expanded, so that that actor also provided the voice of Huck, portrayed by Tyrone Giordano, who is deaf.

Goodspeed Musicals staged a major production of the musical at the historic Connecticut theater. The production was directed by Rob Ruggiero and ran from September 26 to November 29, 2008.


Act I
Overture — Big River Orchestra
Do You Wanna Go to Heaven — Company
The Boys — Tom Sawyer and The Boys
Waitin' for the Light to Shine — Huck
Guv'ment — Pap
Hand For the Hog — Tom Sawyer (this number was cut for the revival)
I, Huckleberry, Me — Huck
Muddy Water — Jim and Huck
The Crossing — Slaves
River in the Rain — Huck and Jim
When the Sun Goes Down in the South — Duke, King, Huck and Jim

Act II
Ent'racte — Big River Orchestra
The Royal Nonesuch — Duke and the Company
Worlds Apart — Jim and Huck
Arkansas/How Bless We Are — Fool, Alice's Daughter and the Company
You Oughta Be Here With Me — Mary Jane Wilkes, Susan Wilkes and Joanna Wilkes
How Blest We Are (Reprise) — Company
Leavin's Not the Only Way to Go — Mary Jane Wilkes, Jim and Huck
Waitin' for the Light to Shine (Reprise) — Huck
Free At Last — Jim and the Slaves
River in the Rain (Reprise) — Huck and Jim
Muddy Water (Reprise) — Company 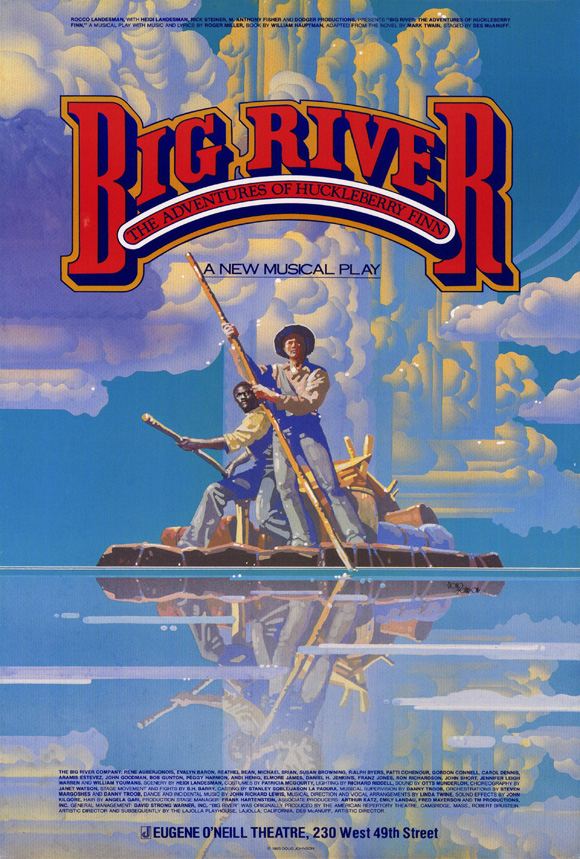