In a small Northern town in 1947 the townsfolk are suffering from the continuing food rationing. Councillor Swaby and some similarly corrupt local businessmen plan to celebrate the forthcoming marriage of Princess Elizabeth and Prince Phillip with a lavish pork supper, and are illegally raising a pig for their “private function”, even though one of the men, Henry Allardyce, has found himself strangely attracted to the beautiful blue eyes of the pig herself. However, the pig is stolen by a local chiropodist, Gilbert Chilvers, encouraged by his socially ambitious wife Joyce, in protest against the Town Council’s refusal to grant him planning permission. Joyce’s confused and elderly Mother Dear, over-hearing talk of “killing the unmentionable” believes she is the intended victim of this murder. Meantime, a fanatical Inspector Wormold, from the Ministry of Food, is on the lookout for illegal pigbreeding, while Betty, the stolen pig, is hidden in the Chilvers’s bathroom, from where she emits great clouds of green methane gas.

Betty Blue Eyes has received much press in being producer Cameron Mackintosh's "first gleaming new musical in over 10 years."
When describing what drew him to the project (which he has described as "delicious"), Mackintosh said: "The score was written by friends of mine, George Stiles and Anthony Drewe, whom I've known for 25 years and [who,] of course, did all the terrific new songs for Mary Poppins ... The book was written by two Americans [Cowen and Lipman], and it was their idea... I read it and I thought it was the most original piece I had read in a long, long time. I mean, I knew they were working on it, because the moment I heard it was a musical version of A Private Function — a film I loved, by Alan Bennett, which was very, very funny and off-the-wall — I was intrigued..."

Based on the screenplay “A Private Function” by Alan Bennett and Malcolm Mowbray, the book for this very English story was written by two Americans.

Betty Blue Eyes opened at the Novello Theatre in the West End, London, on April 13, 2011, following previews from March 19, in a production directed by Richard Eyre, with musical staging by Stephen Mear and design by Tim Hatley. The orchestrations were by William David Brohn. The cast consisted of Sarah Lancashire as Joyce Chilvers, Reece Shearsmith as Gilbert Chilvers, David Bamber as Doctor Swaby, Jack Edwards as Mr Allardyce, Ann Emery as Mother Dear, Mark Meadows as Lockwood and Adrian Scarborough as Inspector Wormold. Despite positive reviews the musical closed in London on September 24, 2011, after a run of just six months. 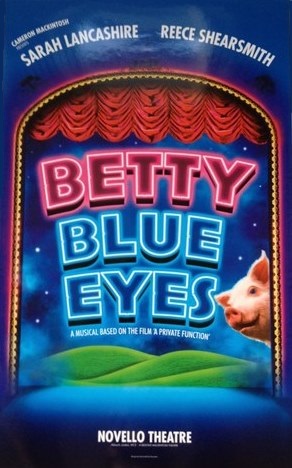