An Egyptian Police Band arrives in Israel to play a concert. After a mix-up at the border, they are sent to a remote village in the middle of the desert. With no bus until morning and no hotel in sight, these unlikely travelers are taken in by the locals. Under the spell of the desert sky, their lives become intertwined in the most unexpected ways. The Band's Visit celebrates the deeply human ways music and laughter connect us all.

Based on the 2007 Israeli film of the same name

The original production premiered in Off-Broadway previews at the Atlantic Theater Company on November 11, 2016, had its official opening on December 8, 2016, and closed on January 8, 2017. The musical was developed and produced with support from the National Endowment for the Arts, the Laurents/Hatcher Foundation, and the National Alliance for Musical Theatre’s National Fund for New Musicals. The musical was directed by David Cromer with choreography by Patrick McCollum and movement by Lee Sher and starred Tony Shalhoub, Katrina Lenk, and John Cariani.

The musical began previews on Broadway on October 7, 2017, at the Ethel Barrymore Theatre prior to an official opening on November 9, 2017.

On September 10, 2018, the producers announced that it had recouped its $8.75 million capitalization cost.

Based on the tracklist from the cast recording released on December 15, 2017

In the review of the Off-Broadway production, the Huffington Post called the musical "exquisite", noting that Itamar Moses and David Yazbek have "created a small, touching show... [with] character depth and strong sense of place."

According to Forbes, by October 2017, the Broadway show was "making a great impression" with critics with its first seven performances. The Broadway production, which featured a revised script and score, was praised by the Twin Cities Arts Reader as "one of the best new musicals of the year, gifted with a beautiful score and touching performances." The New York Times said it was "one of the most ravishing musicals you will ever be seduced by," and also "a Broadway rarity seldom found these days outside of the canon of Stephen Sondheim: an honest-to-God musical for grown-ups." It also praised the adaptation for the bigger stage, due to an "impeccably coordinated creative team." Deadline also gave the musical a positive review. The review's only criticism was that seating at a far distance in the new theater made the sound somewhat muddled and sight lines limited.

The Chicago Tribune gave the "weird new Broadway musical" a very positive review and said it was a "remarkable and boundlessly compassionate and humanistic piece of theater."[19] Tablet Magazine thought it was "terrific."[20] Entertainment Weekly also reviewed The Band's Visit positively, praising Katrina Lenk's portrayal of the cafe owner Dina as "dazzling." It gave the production an A-, and said it is "understated, probably better described as charming than life-altering, but its scale reinforces the moral themes of the musical itself."[21] The Washington Post observed that "producers unaffiliated with the show say they are heartened by its run," as the "almost minimalist" production was doing well despite not having what seemed to be "a lot of overt commercial potential."[22] 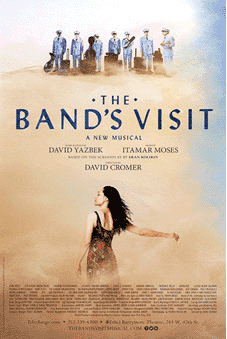 Perhpas the most hyped Broadway opening of fall 2017, The Band's Visit is simply unlike anything else on the Great White Way. As the musical begins, a projection tells us that “Once not long ago a group of musicians came to Israel from Egypt.” A second projection then reads: “You probably didn’t hear about it. It wasn’t very important.” And with that, we are gently lulled into 90 minutes of a story where, as those self-deprecating words predict, nothing truly important happens... And yet, everything that could happen in a group of characters' lives, does happen.

The Band's Visit is about a meeting of two groups of strangers, brought together by a simple mishap. Instead of ending up in the bustling city of Petah Tikva in Israel, an Egyptian police band accidentally end up in the small, isolated town of the similarly-pronounced Bet Hatikva and are taken in by the locals for one night. Although the setting is the catalyst for David Yazbek's beautiful, Middle Eastern-infused score, you could pick this story up and place it in any isolated town or village anywhere in the world. It is this universal aspect to the story that audiences are connecting with. A small, "unimportant" story is speaking volumes about humanity and how we can form bonds with those we usually wouldn't encounter in our regular lives. How do we overcome our loneliness? How do we re-connect with our estranged loved ones?

The cast is filled with talented actor/musicians who are often omnipresent on stage, blurring the lines between musical numbers and scene changes, creating quite the non-traditional musical in the process. The captivating leading duo of Dina, a café owner in the town, and Tewfiq, the band's conductor, are worlds apart in their manners and sensibilities and yet set a story in motion that has us crying out for a sequel.

The Band's Visit is the runaway hit of the 2017-2018 Broadway season. But unlike the short, overnight stay depicted in the musical, this band has visited the Barrymore Theatre and they are here to stay.En savoir plus sur cette version