[title of show] is a one-act musical, with music and lyrics by Jeff Bowen and a book by Hunter Bell. The show chronicles its own creation as an entry in the New York Musical Theatre Festival, and follows the struggles of the author and composer/lyricist and their two actress friends during the initial brief (three-week) creative period, along with subsequent events leading up to the show's production.
[title of show] was chosen for production by the Musical Theatre Festival and premiered there, in September 2004, in New York City. It later ran off-Broadway at the Vineyard Theatre in 2006, earning a second limited run the same year, then played at Broadway's Lyceum Theatre in 2008 for 13 previews and 102 regular performances. Writer/stars Bowen and Bell, as well as director Michael Berresse all won Obie Awards for their work on the off-Broadway production, and Bell was nominated for a Tony Award for Best Book of a Musical.

The musical spawned a recurring video blog about the show's journey to Broadway called The [title of show] Show.

Tells the tale of two struggling writers named Jeff and Hunter who race to write and submit a show to the theatre festival - with the deadline just weeks away. When they enlist two of their friends to be in it, all four embark on a breathless, sweat-drenched journey. Will they finish in time? Will their show be selected? Will they keep their beloved project - and their friendships intact? Chronicling the story of its own creation, [title of show] is a glimpse into just what it takes to get a new musical from conception to opening night.

[title of show] was conceived by friends Bowen and Bell during the spring of 2004 after Bell received an announcement for the inaugural New York Musical Theatre Festival. With the deadline just three weeks away, Bell began drafting the script with Bowen writing the lyrics and music. Due to the severe time constraints, and because the Festival required only the submission of a script plus four songs, Bowen wrote most lyrics without any accompanying melody, planning to finish the songs later. Nevertheless, many of these lyrics have remained intact through several incarnations and revisions to the show.
Bowen and Bell, determined to write an original musical rather than adapt an existing play or movie, discovered almost immediately that their conversations about what to write were more interesting than what they were actually writing. As the idea to document the creation of the show itself ("a musical about two guys writing a musical about two guys writing a musical) became clearer, Bell and Bowen expanded the script based on their writing experiences with friends Susan Blackwell and Heidi Blickenstaff. [title of show] has since become a post-modern work-in-progress, with updates and changes to each new production reflecting the circumstances the cast and the show have experienced.[citation needed] Larry Pressgrove is the musical director and orchestrator in all of its productions to date.

Early performances
The first three performances of [title of show], at the Manhattan Theatre Source in the summer of 2004, were produced by Laura Camien. The cast included Bowen, Bell, Blackwell, and Stacia Fernandez, playing the role of "Stacia". Bowen and Bell convinced several Broadway stars to participate in a recurring plot device by leaving recorded phone messages rejecting offers to star in the show. Messages featured in the Theatre Source and Festival performances included Idina Menzel, Marin Mazzie, Sutton Foster and Emily Skinner.
The production premiered at the 2004 New York Musical Theatre Festival on September 22, 2004 (also produced by Camien), at the Belt Theatre, and ran for six performances as scheduled. Heidi Blickenstaff replaced Fernandez, who had accepted the understudy role to Beth Leavel in the Broadway production of The Drowsy Chaperone. While her character's name remained "Stacia" for the Festival performances, thereafter it became "Heidi", and the role was modified to reflect Blickenstaff's experiences while helping to expand and evolve the show.
A year of expansion and revision followed. Kevin McCollum agreed to produce [title of show] for professional presentation after seeing it performed at the Festival. Five new songs were added: "Monkeys and Playbills", "What Kind of Girl is She?", "Festival Medley/September Song", "Secondary Characters" and "Nine People's Favorite Thing". "The Wall", originally sung by Jeff and Stacia at the Festival, was rewritten as a solo for Heidi with new lyrics, and a new name, "A Way Back to Then." Changes to the book included the addition of the conflict between Susan and Heidi (as introduced by "What Kind of Girl Is She?") and the combined music and scenes "Awkward Photo Shoot" and "Change It, Don't Change It." Both reflected the tension among the cast members that had begun to set in since the Festival's performance and their uncertainty about an off-Broadway run.
After several performances at the Eugene O'Neill Theater Center in Waterford, CT, six off-off Broadway performances were staged at Ars Nova in New York City in September 2005.[8] Phone messages in the Ars Nova production were left by Marin Mazzie and Emily Skinner again, with new messages from Amy Spanger and Victoria Clark. The success of these performances led to an offer by the Vineyard Theatre of a limited off-Broadway run.

Broadway
The musical began previews on Broadway at the Lyceum Theatre on July 5, 2008 and officially opened on July 17. It closed October 12, 2008 after 13 previews and 102 performances. It was produced by McCollum, Roy Miller (producer of The Drowsy Chaperone), The Vineyard Theatre, Laura Camien and Kris Stewart, the founder of the New York Musical Theatre Festival.
The entire off-Broadway cast continued in the same roles, and Berresse continued as director. Added to the list of phone messages in the Broadway production was the voice of Patti LuPone.[9][10] Scenic design was by Neil Patel, costumes by Chase Tyler and lighting by Ken Billington and Jason Kantrowitz. The show won a 2009 Broadway.com Audience Award for Favorite Ensemble Cast.[citation needed]

Off-Broadway
[title of show] was performed at the Vineyard Theatre from February 26, 2006 to April 24, 2006 as part of the theatre's regular season line-up, followed by an extension of the production from July 14, 2006 through October 1, 2006. Christine Ebersole lent her voice to one of the phone messages. The production won three Obie Award Special Citations for its writer/stars and director.
A performance was scheduled to play in San Francisco in 2008 but was canceled because of time constraints in moving the show to Broadway by July 2008. The show's transfer to Broadway is chronicled in "the [title of show] show" video blogs on YouTube and on the show's official web site.
Many regional productions have been produced, starting in January 2010 in St. Louis, Missouri.
A regional production ran from November 16, 2010 to December 12, 2010 at the George Street Playhouse, New Brnswick, New Jersey, with Seth Rudetsky, Tyler Maynard, Lauren Kennedy and Susan Mosher. A production was mounted by Forte Musical Theatre Guild in Calgary from May 24 to June 4, 2011, Directed by: Glenda Stirling

London's West End
A London production of the show was announced in 2010, originally set to open in late 2011.[3] The show's producer later announced the production's postponement to late 2012 on his blog. 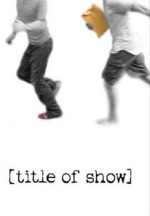 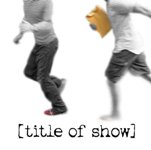