The Wizard of Oz was first turned into a musical extravaganza by Baum himself. A loose adaptation of his 1900 novel (there is no Wicked Witch or Toto, and there are some new characters), it first played in Chicago in 1902 and was a success on Broadway the following year. It then toured for nine years. The 1939 film adaptation bore a closer resemblance to the storyline of Baum's original novel than most previous versions. It was a strong success, winning the Academy Awards for best song and best score, and continues to be broadcast perennially.
Among the many musical theatre adaptations of The Wizard of Oz, two previous ones have used the songs from the film. In 1945, the St. Louis Municipal Opera (MUNY) created a version with a script adapted by Frank Gabrielson from the novel, but it is influenced in some respects by the motion picture screenplay. It uses most of the songs from the film. This was followed, in 1987, by a Royal Shakespeare Company (RSC) adaptation designed to more closely recreate the film version. The book by John Kane closely follows the film's screenplay, and it and uses nearly all of the film's music. Both the MUNY and RSC adaptations were successes and have been revived numerous times in the U.S. and UK.
The Wizard of Oz is Andrew Lloyd Webber's 18th musical. Tim Rice first collaborated with Lloyd Webber in 1965, together writing The Likes of Us. Their next piece was Joseph and the Amazing Technicolor Dreamcoat, followed by two more concept albums that became hit musicals, Jesus Christ Superstar (1971) and Evita (1978). Except for a special collaboration for Queen Elizabeth's 60th birthday celebration, the musical Cricket in 1986, after Evita, each man turned to other collaborators to produce further well-known musical theatre works.
The Wizard of Oz was Rice and Lloyd Webber's first production together in the West End in over three decades. To create the new musical, Lloyd Webber and director Jeremy Sams adapted the 1939 film's screenplay, and Rice and Lloyd Webber added several new songs to the film's score. In July 2010, Lloyd Webber told the Daily Mail, "The fact is that The Wizard of Oz has never really worked in the theatre. The film has one or two holes where in the theatre you need a song. For example, there's nothing for either of the two witches to sing." "Tim and I are doing quite a specific thing, because we know what's missing."
Productions
After previews beginning 7 February, the musical opened in the West End, at the London Palladium, on 1 March 2011. The role of Dorothy was originally played by Danielle Hope, who was selected through the reality television show Over the Rainbow, and the title role of the Wizard was created by Michael Crawford. Over the Rainbow runner-up Sophie Evans performed the role of Dorothy on Tuesday evenings and when Hope was ill or on holiday. Hannah Waddingham originated the role of the Wicked Witch of the West leaving the cast on September 2011, when her understudy, Marianne Benedict assumed the role. Hope and Crawford left the production on 5 February 2012. Evans replaced Hope in the role of Dorothy full-time beginning 7 February 2012, and Russell Grant took over as The Wizard a week later, for 14-weeks. Des O'Connor played The Wizard from May 2012 until the production closed.
The musical was produced by Lloyd Webber and Bill Kenwright, with direction by Jeremy Sams, choreography by Arlene Phillips and sets and costumes by Robert Jones. It took in pre-opening sales of £10 million. The production celebrated its 500th performance on 9 May 2012 and closed on 2 September 2012.
An autumn 2012 reality TV show, Over the Rainbow, hosted by Daryn Jones, searched for a Canadian girl to play the role of Dorothy in a forthcoming Toronto staging by Mirvish Productions. On 5 November 2012, viewers chose Danielle Wade, a 20-year-old University of Windsor acting major, to play the role of Dorothy, with Stephanie La Rochelle as 1st runner up. The production premiered on 20 December 2012 at the Ed Mirvish Theatre with an official opening night on 13 January 2013. The cast also includes Cedric Smith as Professor Marvel/the Wizard, Lisa Horner as Miss Gulch/The Wicked Witch of the West, Mike Jackson as the Hickory/Tin Man, Lee MacDougall as the Zeke/Cowardly Lion, Jamie McKnight as Hunk/the Scarecrow and Robin Evan Willis as Glinda. The production is then expected to begin touring North America in autumn 2013 with the original Canadian cast.


ost of the musical's songs are taken from the 1939 film and were written by Harold Arlen and E. Y. Harburg. New numbers written by Andrew Lloyd Webber and Tim Rice include a song for Professor Marvel ("The Wonders of the World") and the Wicked Witch of the West ("Red Shoes Blues"), two songs for the Wizard ("Bring Me the Broomstick" and "Farewell to Oz") and another song for Dorothy ("Nobody Understands Me"). A song featured in the film but omitted in the musical is "If I Were King of the Forest."[33][34]

Act I
"Overture" – Orchestra and Ensemble
"Nobody Understands Me"* – Dorothy, Aunt Em, Uncle Henry, Hunk, Hickory, Zeke and Miss Gulch
"Over the Rainbow" – Dorothy
"The Wonders of the World"* – Professor Marvel
"The Twister" – Orchestra
Munchkinland Sequence: "Come Out, Come Out ... Ding! Dong! The Witch is Dead ... We Welcome You to Munchkinland" – Glinda, Dorothy and Munchkins
"Follow the Yellow Brick Road" – Glinda, Dorothy and Munchkins
"If I Only Had a Brain" – Scarecrow and Dorothy
"We're Off to See the Wizard" – Dorothy and Scarecrow
"If I Only Had a Heart" – Tin Man
"If I Only Had the Nerve" – Lion
"Optimistic Voices" – Dorothy, Lion, Scarecrow, Tin Man and Ensemble
"The Merry Old Land of Oz" – Company
"Bring Me the Broomstick"* – The Wizard

Act II
Entr'acte – Orchestra
"We Went to See the Wizard"** – Dorothy, Scarecrow, Tin Man and Lion
"March of the Winkies" – Ensemble
"Red Shoes Blues"* – Wicked Witch of the West and Winkies
"Over the Rainbow" (reprise)** – Dorothy
"If We Only Had a Plan"** – Lion, Tin Man and Scarecrow
"March of the Winkies" (reprise) – Ensemble, Tin Man, Scarecrow and Lion
"Hail – Hail! The Witch is Dead" – Ensemble
"You Went to See the Wizard"** – The Wizard
"Farewell to Oz"* – The Wizard
"Already Home"* – Glinda, Dorothy and Ensemble
Finale – Dorothy and Company 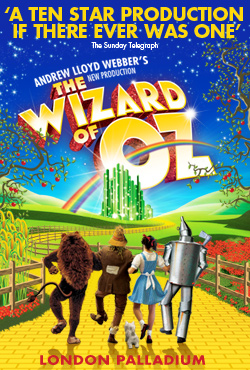 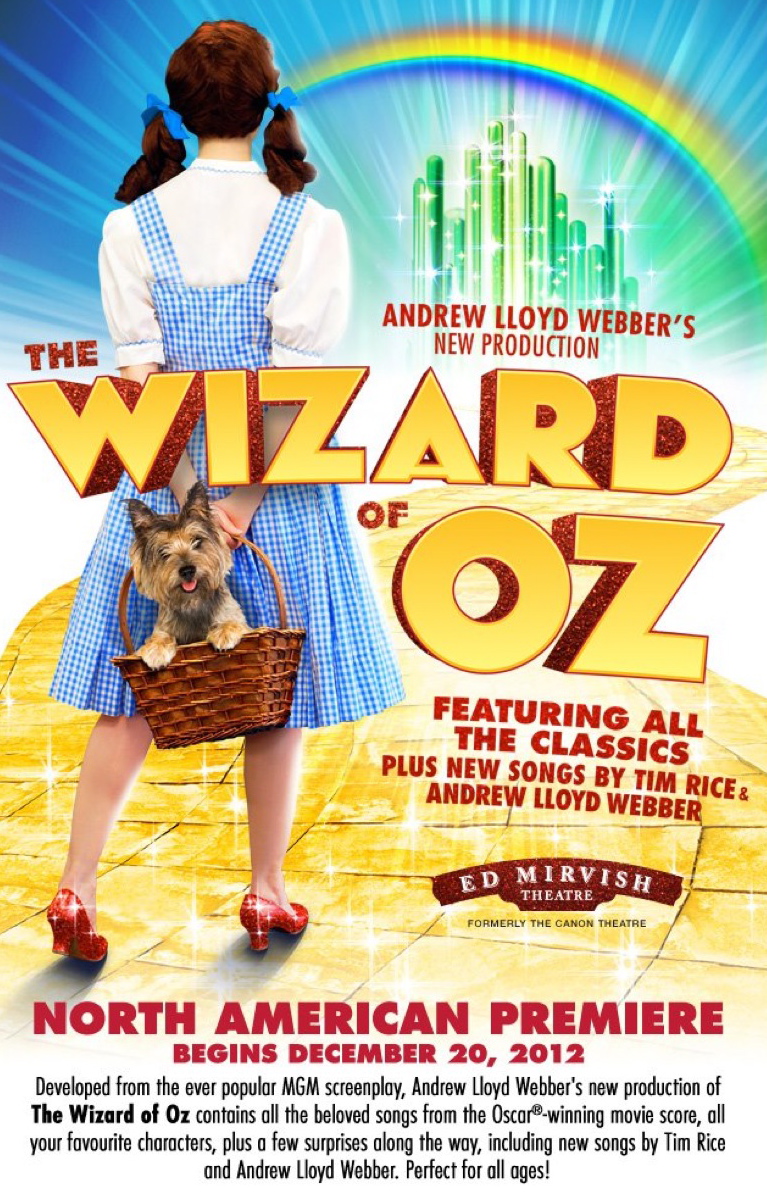