Stakes are higher than ever before as SpongeBob and all of Bikini Bottom face the total annihilation of their undersea world. Chaos erupts. Lives hang in the balance. And just when all hope seems lost, a most unexpected hero rises up and takes center stage. Get ready to dive to all-new depths of theatrical innovation at SpongeBob SquarePants, where the power of optimism really can save the world!

It is based on the Nickelodeon animated television series SpongeBob SquarePants

Lyrics for the show were being written by January 2014, as The Flaming Lips' lead singer Wayne Coyne mentioned through Twitter on January 16. Plans for developing the show were first announced at Nickelodeon's upfront on February 25, 2015. The upfront presentation included a performance of the musical's opening number, "Bikini Bottom Day." On February 26, Nickelodeon's chief operating officer Sarah Kirshbaum Levy told the Associated Press that the show was "not definite."

In August 2015, Nickelodeon announced that the show would premiere in Chicago before a Broadway run in late 2016. Its director, book author, and several of the musicians involved were also announced. The full cast list was released in April 2016.[10] The majority of the cast members play more than one character. Rehearsals for the show's debut in Chicago began on April 11 in New York. Throughout early 2016, Nickelodeon executives met with Broadway theater owners to arrange its Broadway premiere. Michael Reidel of New York Post stated that Broadway representatives were "impressed" after seeing a presentation of the show.

In late May 2016, technical rehearsals for the show were conducted. Chris Jones of Chicago Tribune stated that Nickelodeon was concerned about "an incomplete SpongeBob costume [making] it into a photograph, spoiling a planned big reveal." In June 2016, Gordon Cox of Variety reported that the musical's budget was between $15 and $20 million.

Production
The musical opened at the Oriental Theatre, Chicago on June 19, 2016. The musical premiered on Broadway at the Palace Theatre on November 6, 2017 in previews, officially on December 4, 2017. Choreography is by Christopher Gattelli, scenic and costume design by David Zinn, lighting design by Kevin Adams, projection design by Peter Nigrini, sound design by Walter Trarbach and hair and wig design by Charles G. LaPointe. The musical closed on September 16, 2018, after 327 regular performances, due to renovation of the Palace Theatre. The musical will have a North American national tour beginning fall 2019. Playbill noted that "Director Tina Landau, whose visual style and unconventional use of performance spaces are a hallmark of her ambitious, ensemble-driven works, is the driving force behind SpongeBob on Broadway."

Playbill noted "The cast and creators of 'SpongeBob Squarepants' are heading into their final weeks of performances at the Palace Theatre with encouraging box office figures.... The production brought in $975,286 for the week ending 2 September 2018. While that number doesn't surpass the production's million dollar benchmark, it's an encouraging figure for the well-received musical." 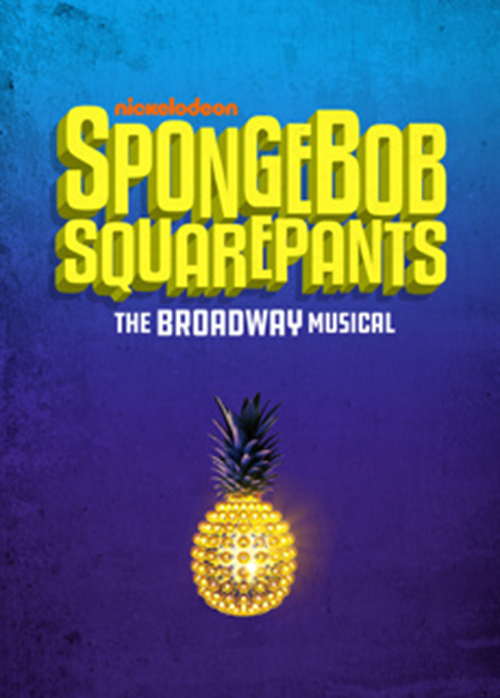 Ever wondered what it would be like to be part of a living cartoon? Landau's zany, brightly-coloured production makes no apologies for immersing the audience in an eccentrically cartoonish world. The auditorium itself is decorated to convey an underwater wonderland and one of the busiest crew members is the percussionist downstage right, who is also responsibile for every sound effect from the squelching of Squidward's tentacles to the booming of Pearl Krabs (a whale), as those characters cross the stage. Every Crash! Bang! Wallop! is as over-the-top as the cartoon itself, but Landau also creates a world that is uniquely theatrical. From a bloom of jellyfish made from pink umbrellas to an underwater volcano comprised of crates of orange cardboard boxes and orange ladders, imagination has been poured into this production by the bucketload! A special mention for the huge contraptions located on either side of the proscenium that launch "falling boulders" onto the stage - inspired by the "Mouse Trap" board game and a delight for younger audience members to behold.

With so many diverse acts from the music industry contributing to the musical - from Aerosmith, Sara Bareilles, and John Legend to Cyndi Lauper, Panic! At the Disco, and David Bowie - the result is perhaps one of the most eclectic scores on Broadway. Alongside classic show tunes, there are numbers that delve into the genres of Pop ("(Just A) Simple Sponge"), Rock ("Bikini Bottom Boogie"), RnB ("(I Guess I) Miss You") and even Gospel ("Super Sea Star Savior"). And at curtain call, of course, the audience is sent back out onto land with the popular theme song from the animated series. Who lives in a pineapple under the sea?... You know the one!

SpongeBob SquarePants is a great alternative destination for the young and for the young at heart, who don't take themselves or life too seriously. Tina Landau has done a superb job of idiosyncraticly adapting SpongeBob for the stage, whilst maintaining the distinctly irreverent tone of the cartoon.En savoir plus sur cette version