The musical, which premiered on Broadway in 1928, was Porter's first Broadway hit. The musical introduced the song "Let's Do It, Let's Fall in Love" sung by the show's star, Irene Bordoni. The story involves a young man from a very proper family in Newton, Massachusetts whose mother is horrified by his intention to wed a French actress.

Mrs. Cora Sabot is a domineering and haughty society matriarch who lives in Massachusetts. Her son Andrew plans on marrying the famous French stage actress Vivienne Rolland. Mrs. Sabot goes to Paris and decides that the actress is not of the caliber she wishes for her son, and therefore intends to stop the marriage. There she feigns drunkenness and fakes falling under the romantic influence of Guy Pennel, Vivienne's stage partner. However, she actually does become drunk and is comically transformed into a passionate woman. Mrs. Sabot's scheme works, and Vivienne realizes that she and Guy are meant to be romantic partners in life as well as on the stage. Andrew meanwhile understands that Brenda Kaley, as slow and obtuse as she is, will make the perfect wife.

According to writer Stephen Citron in his book Noel & Cole: the Sophisticates, it was with Paris that Cole Porter would be accepted in the "upper echelon" of Broadway composers. Although it was not a revue, the critics could not find the plot. An eleven-piece orchestra was placed in the leading lady's room, singing and dancing as well as providing the orchestral accompaniment. The producer (and also songwriter) Ray Goetz kept the musical in tryouts for almost 8 months, while songs were added and deleted. The song "Let's Misbehave" was dropped in favor of one of Porter's "best known songs", "Let's Do It, Let's Fall in Love". The censors had insisted that the "Let's Fall in Love" be added to the title. The plot was designed for Irene Bordoni "to show off her wardrobe and ingratiating stage presence".

Paris started pre-Broadway tryouts at Nixon's Apollo Theatre, Atlantic City on February 6, 1928, followed by: the Adelphi Theatre, Philadelphia on February 13, 1928; the Wilbur Theatre, Boston as of May 7, 1928; and finally the Poli Theatre, Washington DC on September 30, 1928.

In 1929 Warner Brothers made the musical into a feature film, starring Bordoni, Jack Buchanan, Jason Robards Sr. and ZaSu Pitts. 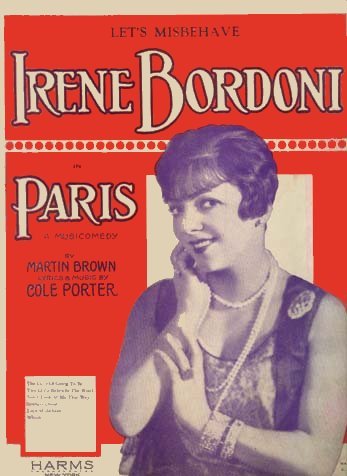