Captain Billy Buck Chandler wants to be the first to make a solo flight across the Atlantic. Edythe
Herbert, a champion swimmer, is being blackmailed by her wicked Russian manager who has some
compromising photographs of her . This devious baddy known as Prince Nikki (and secretly a spy) will get his
come-uppance, thanks to Billy’s airplane engineer, a rather butch lady called Mickey (who turns out to be a
secret agent). By then, however, Billy and Edythe have fallen in love, have crashed on a desert island (actually
Staten Island!), and have seen off a bootlegging Harlem minister and a tap-dancing philosopher called Mr
Magix.

Just prior to out of town tryouts in Boston, the original director, Peter Sellars, was fired, with the musical director and arranger, the book writer, Tim Mayer, and set designer, Adrianne Lobel, dismissed soon after. Tommy Tune "nominally took over the direction with his co-choreographer Thommie Walsh, and Mike Nichols, Tony Walton and...Michael Bennett were brought in to help with the direction, choreography and set design."

Productions
My One and Only opened on Broadway at the St. James Theatre on May 1, 1983 and closed on March 3, 1985 after 767 performances and 37 previews. The musical was directed and choreographed by Tommy Tune and Thommie Walsh. The cast included Tune, Twiggy, Roscoe Lee Browne, Denny Dillon, Charles "Honi" Coles, and Nana Visitor. Notable replacements during the run included Sandy Duncan, Don Correia, Jeff Calhoun, and Georgia Engel.

The musical opened in the UK at the Chichester Festival Theatre and then opened in the West End at the Piccadilly Theatre in February 2002, starring Janie Dee as Edythe Herbert and Tim Flavin as Captain Billy Buck Chandler, with direction by Loveday Ingram and choreography by Craig Revel Horwood.

Cabaret singer and Gershwin historian Michael Feinstein served as the musical consultant for the project. An extensive review of the show's creation can be found in his book" Nice Work If You Can Get It" in a chapter entitled My One and Only Tommy Tune Fling.

There were several tours, all with Tommy Tune. The first was in 1985 with Sandy Duncan which started at the Kennedy Center in March 1985 and included a six week engagement in Japan. Lucie Arnaz replaced Duncan in this tour. Stephanie Zimbalist starred in the US national tour in 1987.

Act I
I Can't Be Bothered Now
Blah, Blah, Blah
Boy Wanted
Soon
High Hat/Sweet and Low
Just Another Rhumba
He Loves and She Loves
'S Wonderful
Strike Up the Band

Act II
In The Swim
Nice Work If You Can Get It
My One And Only
Funny Face
Kicking The Clouds Away
How Long Has This Been Going On?

Aucun dossier informatif complémentaire concernant My one and only 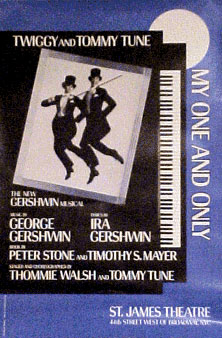 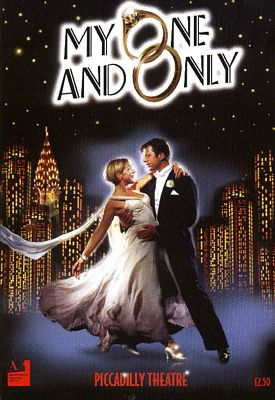