Musical that tells the story of the night in 1956 when Elvis Presley, Johnny Cash, Carl Perkins and Jerry Lee Lewis came together to make music and ended up making history. Is inspired by the actual event that took place on 4 December 1956 at Sun Records in Memphis and features over 20 of the greatest rock ’n’ roll, gospel, R&B and country hits

The legendary meeting was masterminded by Sun Records’ founder Sam Phillips, who discovered all four of the musicians, and brought Elvis Presley (and his then girlfriend) back to the recording studio that launched him to stardom. Together with Sun Records' fast-rising new superstar Johnny Cash and Carl Perkins, who was still chasing his next big hit after writing and recording Blue Suede Shoes, the fourth member of this impromptu 'quartet' was Phillips' latest signing, Jerry Lee Lewis.

The musical premiered at Florida's Seaside Music Theatre in 2006 and was then staged at the Village Theatre in Issaquah, Washington in September through October 2007, and Everett, Washington, in January 2008, breaking box office records.

Chicago (2008-)
The musical had a limited run at Chicago's Goodman Theatre, opening on September 27, 2008. Mutrux co-directed the Chicago production with Eric D. Schaeffer, Artistic Director of Virginia's Signature Theatre. The show transferred to Chicago's Apollo Theater where it opened on October 31, 2008.

Broadway (2010-2011)
The Broadway production premiered at the Nederlander Theatre on April 11, 2010, with a cast featuring Eddie Clendening as Elvis Presley, Lance Guest as Johnny Cash, Levi Kreis as Jerry Lee Lewis, Robert Britton Lyons as Carl Perkins and Hunter Foster as Sam Phillips. The Broadway cast also included Elizabeth Stanley as "Dyanne", who in the show accompanies Elvis Presley to the Sun Records studio and sings "Fever" and "I Hear You Knocking," as well as provides back-up vocals. The original Broadway cast also included Corey Kaiser as Jay Perkins on bass and Larry Lelli as Fluke the drummer. Again directed by Eric Schaeffer, the scenic design is by Derek McLane, costume design is by Jane Greenwood, and lighting design by Howell Binkley.
The musical was nominated for three 2010 Tony Awards: Best Musical, Best Book of a Musical and Best Performance by a Featured Actor in a Musical for Levi Kreis. Kreis won the award for Best Featured Actor for his portrayal of Jerry Lee Lewis.
The musical closed on June 12, 2011 after having played 489 performances and 34 previews. The production opened Off-Broadway at the New World Stages in July 2011.

West End (2011-2012)
Million Dollar Quartet: The Musical opened in the West End at the Noël Coward Theatre on February 28, 2011, with previews from February 8.
The original cast featured Bill Ward as Sam Phillips, Ben Goddard as Jerry Lee Lewis, Derek Hagen as Johnny Cash, Francesca Jackson as Dyanne, Robert Britton Lyons as Carl Perkins (However from March 2011, he was replaced by Oliver Seymour - Marsh who was originally the first understudy for the same role), and Michael Malarkey as Elvis Presley. This production is again directed by Schaeffer with orchestrations and arrangements by Chuck Mead. The show closed in London on January 14, 2012, having previously been booking until October 27, 2012. 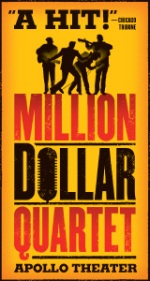 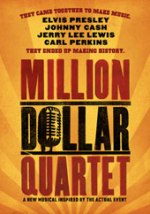 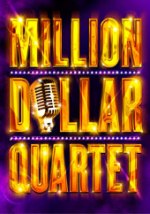 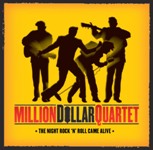 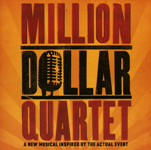