Blonde, Chihuahua-toting fashion-student Elle Woods is devastated when her fiancé Warner Huntingdon decides to abandon her in favour of his legal studies at Havard. So, determined to prove she is more than an empty- headed bimbo, she also enrols at Havard. Clashing with snobby classmates and appalled professors, especially the supercilious Professor Callahan, she eventually saves the day as a legal intern working on a scandalous murder case where she wins the case by forcing a witness out of the closet (Is he gay or European?). Along the way she solves the romantic problems of Paulette, a lovelorn manicurist and Kyle, an hilariously macho delivery-man; gets support from a celebrity fitness instructor; and finds true love for herself in the shape of the geeky but lovable Emmett Forrest.

Broadway (2007-2008)
After a tryout at San Francisco's Golden Gate Theatre from February 6 to February 24, 2007, following previews from January 23, Legally Blonde opened on Broadway at the Palace Theatre on April 29, 2007, following previews from April 3. The production was directed and choreographed by Jerry Mitchell, with set design by David Rockwell, costume design by Gregg Barnes, and lighting design by Kenneth Posner and Paul Miller. The original Broadway cast included Laura Bell Bundy in the lead role of Elle Woods and featured Christian Borle, Orfeh and Michael Rupert. The show received mostly positive reviews and was nominated for seven Tony Awards, including Best Original Score and Best Leading Actress in a Musical, but failed to win any.

During the week ending June 24, 2007, the Broadway production achieved a milestone, joining the millionaires' club for weekly Broadway grosses, by grossing $1,003,282. The musical was filmed for television in front of a live audience on September 18, 2007, as well as two other dates where it was filmed without an audience. The three performances edited together were broadcast on MTV on October 13 and 14, 2007 with subsequent air dates on November 3 and 14, 2007. MTV's involvement with the musical continued with a reality show program called Legally Blonde – The Musical: The Search for Elle Woods, which aimed to cast the next actress to play Elle Woods on Broadway, replacing Laura Bell Bundy. The show was hosted by Haylie Duff, and premiered on June 2, 2008 on MTV. The competition was won by Bailey Hanks, age 20, from Anderson, South Carolina. The results were first aired on July 21, 2008 on MTV, and her debut as Elle Woods was on July 23. The runner-up, Autumn Hurlbert, also debuted on Broadway in this show as a sorority sister in Delta Nu.
The production closed on October 19, 2008 after playing 30 previews and 595 regular performances.

North American Tours (2008-2011)
First National US Tour The first national tour started on September 21, 2008. Becky Gulsvig, who appeared in the ensemble of the original Broadway cast and understudied the role of Elle Woods, is featured as Elle Woods. Lauren Ashley Zakrin and Rhiannon Hansen, both finalists of the MTV reality show, appeared in the national tour. The original tour closed on August 15, 2010 in Vienna, Virginia at the Wolf Trap National Park for the Performing Arts.
Second National US Tour After the first US National Equity Tour ended, the tour closed for a few months and reopened with an all new non-equity cast. The tour launched in Jackson, Mississippi on September 21, 2010. Nikki Bohne led the cast as Elle Woods, with Nic Rouleau (Emmett Forrest), Jillian Wallach (Paulette), Hannah Rose DeFlumeri (Vivienne Kensington), and Kahlil Joseph (Professor Callahan). The tour closed on May 15, 2011 at the Shubert Theatre in New Haven, Connecticut.

West End (2009-2012)
The West End production opened at the Savoy Theatre on January 13, 2010, following previews from December 5, 2009. The original London cast included Sheridan Smith in the lead role of Elle Woods, with Duncan James, Alex Gaumond, Jill Halfpenny and Peter Davison. In the London production, the lyrics to Ireland were changed.
In October 2009, Sheridan Smith, with other cast members, recorded a pop video to the song "So Much Better". The West End cast of Legally Blonde performed a medley from the show at the BBC Television Centre on 19 November 2009 during the Children in Need telethon.
Legally Blonde is the first and so far only West End show to offer a ticket lottery. The trend is popular on Broadway but had never been used for a West End production. The show had taken £2 million in advance sales before it officially opened. It extended its booking period from the earlier date of October 2011 until the March 31, 2012.
Replacing Sheridan Smith as Elle was Irish actress Susan McFadden (from January 10, 2011), who was replaced by Carley Stenson on July 11, 2011. Other notable replacements included Richard Fleeshman, Simon Thomas and Ben Freeman as Warner, Denise Van Outen, Natalie Casey and Sorelle Marsh as Paulette, Lee Mead and Stephen Ashfield as Emmett, Carley Stenson and Ellie Kirk as Margot and Siobhan Dillon as Vivienne.
The West End show won three Laurence Olivier Awards on March 13, 2011 - 'Best New Musical', 'Best Actress in a Musical' (Sheridan Smith), and 'Best Performance in a Supporting Role in a Musical' (Jill Halfpenny). The show began a UK tour in Liverpool in July 2011. The show has had more success in the UK than it achieved in the USA, with the London production being one of the most popular shows in the West End.
The show closed in London on April 7, 2012, after 974 performances, significantly more than it played on Broadway.

First National UK tour
The first UK tour began on July 8, 2011 at The Liverpool Empire Theatre. The cast included Faye Brooks as Elle, Dave Willetts as Professor Callahan, Iwan Lewis as Emmett, Neil Toon as Warner, Charlotte Harwood as Vivienne, Hannah Grover as Brooke, Sophie Isaacs as Margot, Sinead Long as Serena, Micha Richardson as Pilar and Lori Barker as Judge/Saleswoman. Two celebrities from Liverpool shared the role of Elle's friend, Paulette. From July 8 to September 17 the role was played by former Atomic Kitten member Liz McClarnon, and from September 20 to December 3 by Claire Sweeney.
Following Willets, Professor Callahan was played by Matthew Kelly, and later Les Dennis, alongside Niki Evans as Paulette. Due to more dates being added to the initial ones listed, and several members of the cast having other commitments, especially with the Les Miserable film, some of the main roles in the show were covered by former London cast members. Amy Lennox (former 1st understudy Elle) covered Faye Brookes as Elle for the Aberdeen leg of the tour, with Stephen Ashfield reprising Emmett just weeks after leaving the show in London, covering Dublin, Belfast and Woking. Andy Mace (original understudy Callahan) covered Callahan in Dublin, before taking over full-time in July. Other cast changes include Tracey Penn taking over as Vivienne and Antony Hewitt as Carlos.
On the 17th July 2012, Jennifer Ellison replaced Niki Evans as Paulette and Gareth Gates replaced Ray Quinn as Warner.
The final show of the UK tour was performed at the New Wimbledon Theatre on 6 October 2012.

Australian Production 2012
The Australian production began previews in September 2012 at the Lyric Theatre, Sydney, before opening on October 4, 2012.
Joining Lucy Durack in the lead role, are her fellow Wicked co-stars Rob Mills (as Warner) and David Harris (as Emmett). Supermodel Erika Heynatz will make her musical theatre debut as Brooke Wyndham, with Cameron Daddo returning to the Australian stage for the first time in 20 years to play Professor Callahan.
The production is currently touring the continent

International Productions
Legally Blonde has had international productions in South Korea, The Netherlands, France, The Philippines, Sweden, and Finland.
An Austrian Production "NATÜRLICH BLOND" is planned to open in February 2013,(A German Language Premiere) after Sister Act The Musical

During its San Francisco run, the musical included a song called "Love and War" in place of what is now "Positive". Another predecessor to "Positive" was "Beacon of Positivity".
During the musical's workshop stage, the song "Good Boy" existed in what would go on to become "Ireland"'s place in the musical. In the song, Paulette and Elle bond over the idea that men are like dogs and should therefore be treated as such.
"Bows" is featured as a iTunes bonus track on the UK iTunes on the Live London Cast Recording but not featured on the Broadway Recording. "Kyle the Magnificent" is also a bonus track on the Live London Cast Recording after "Take It Like a Man" which is where it is in the show. On the Broadway Cast Recording, it's a hidden track at the end of "Find My Way/Finale".
Δ Not featured on Original Broadway Cast Recording
Ν Instrumental Mix 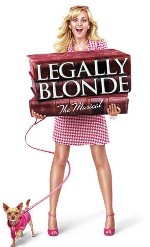 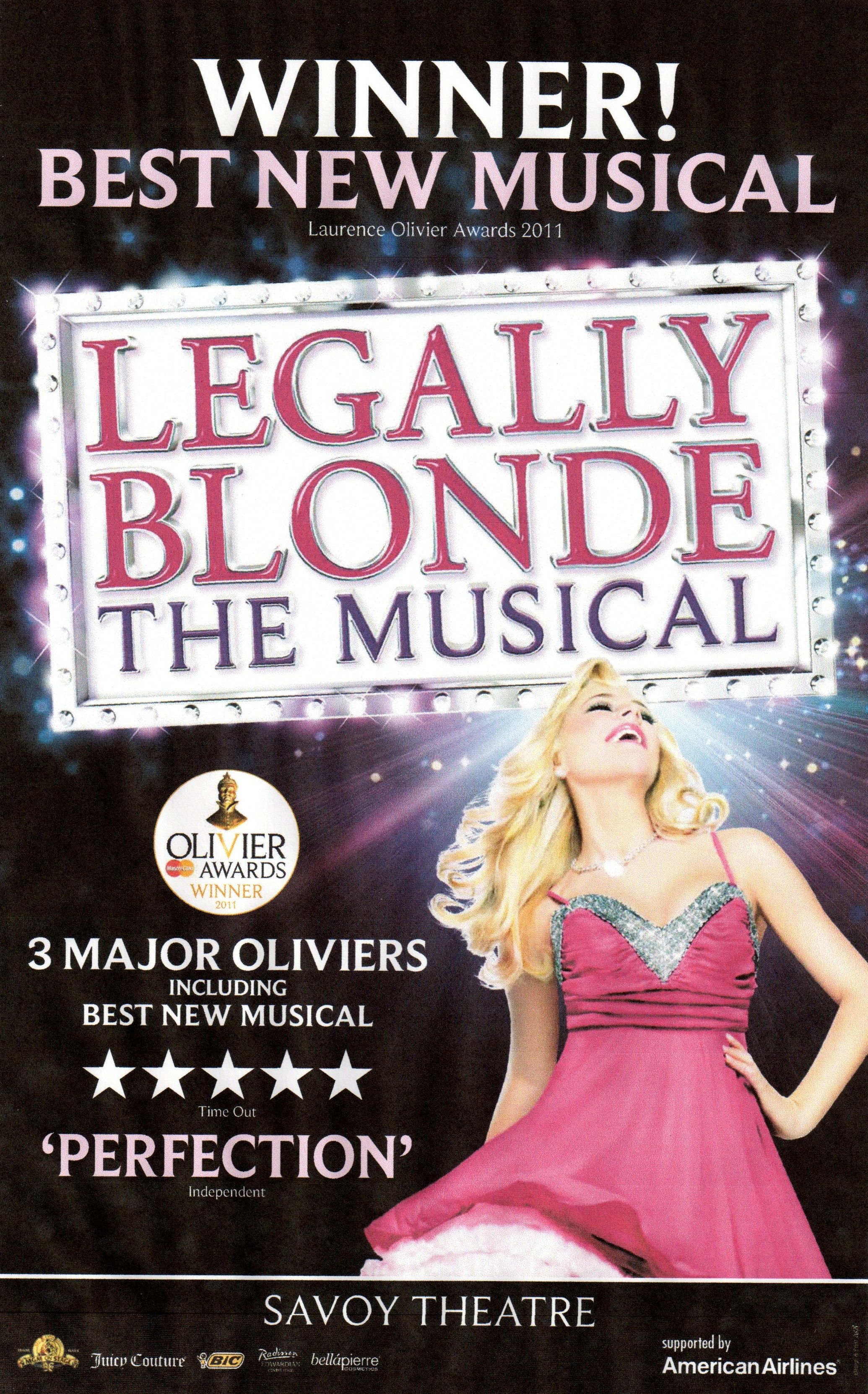 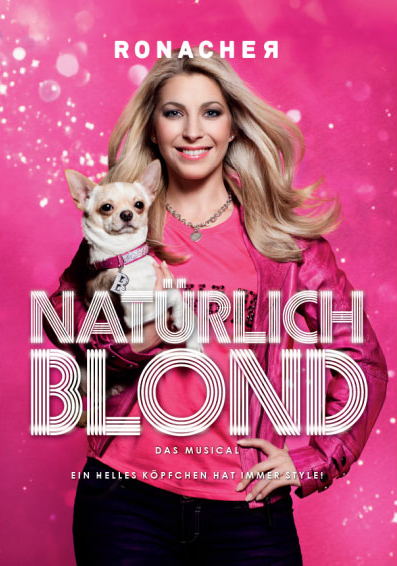