The curtain rises on a present-day musical theatre fanatic eager to tell you about his favorite Broadway musical -- “The Drowsy Chaperone.” He’s the ultimate Everyfan and “Drowsy” is his guilty pleasure.

As he begins listening to the rare cast recording, the show cleverly and magically blooms to life, telling the hilarious tale of a pampered Broadway starlet and her debonair fiance, an overzealous producer, a dizzy chorine, the Latin lover and a couple of bumbling gangsters. Ruses are played. Hi-jinks occur. And the plot spins everyone into musical comedy euphoria.

"To chase his blues away, a modern day musical theatre addict known simply as 'Man in Chair' drops the needle on his favourite LP — the 1928 musical comedy The Drowsy Chaperone. From the crackle of his hi-fi, the uproariously funny musical magically bursts to life on stage, telling the tale of a pampered Broadway starlet who wants to give up show business to get married, her producer who sets out to sabotage the nuptials, her chaperone, the debonair groom, the dizzy chorine, the Latin lover and a pair of gangsters who double as pastry chefs. Man in Chair's infectious love of The Drowsy Chaperone speaks to anyone who has ever been transported by the theatre."

The Drowsy Chaperone started in 1997, when McKellar, Lambert, Morrison and several friends created a spoof of old musicals for the stag party of Bob Martin and Janet Van De Graaff. In its first incarnation, there was no Man in Chair, the musical styles ranged from the 1920s to the 1940s, and the jokes were more risqué. When the show was reshaped for the Toronto Fringe Festival, Martin became a co-writer, creating Man in Chair to serve as a narrator/commentator for the piece.

With Canadian actor and fund-raiser Paul Mack, Miller produced a reading for the New York's National Alliance for Musical Theatre on 5 October 2004 – and invited Broadway producer Kevin McCollum. The reading captured McCollum's interest and eventually resulted in Miller, McCollum and Bob Boyett, Stephanie McClelland, Barbara Freitag and Jill Furman committing to producing the play. An out-of-town engagement followed at the Ahmanson Theatre in Los Angeles (2005), and after alterations, The Drowsy Chaperone opened on Broadway on 1 May 2006.

West End
The Broadway team staged the West End production. Previews started on 14 May 2007, first night was on 6 June, but it closed on 4 August after fewer than 100 performances. A largely British cast, including Elaine Paige – making her return to the West End after six years – John Partridge and Summer Strallen joined the show’s co-author Bob Martin recreating his Broadway role of "Man in Chair." The Novello Theatre’s owner Sir Cameron Mackintosh, who had seen the show in previews in New York had supported its transatlantic transfer. London's critics were generally optimistic about the show, although some had been less impressed. Even an early drastic reduction in the cost of premium seating for the show failed to generate sufficient enthusiasm for the production, and the producers closed it in August instead of the scheduled February 2008 date. London's The Stage commented "… shows in London can run safely … at lower capacities than they require on Broadway.… But, as the transfer of The Drowsy Chaperone has just proved, sometimes even a Tony-winning Broadway hit can’t even achieve that."

A national tour of The Drowsy Chaperone opened 19 September 2007 in Toronto at the Elgin Theatre. Among the performers were original Broadway cast members Bob Martin and Georgia Engel (Man in Chair and Mrs. Tottendale). While Engel performed with the company for the extended engagement, Martin did not continue beyond Toronto; his role was taken over by Jonathan Crombie. Nancy Opel played the role of "The Drowsy Chaperone". The Drowsy Chaperone played more than 30 cities in the United States, including Los Angeles at the Ahmanson Theatre, where the show ran before going to Broadway.[12] 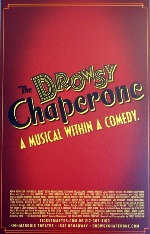 Drowsy Chaperone (The) (2010-09-Upstairs at the Gatehouse-London)