The slight story dealt with Mama Kitzel (Pauline Hoffman), who dictates that none of her brood can marry until the eldest (Betsy) ties the knot. This causes concern among her three sons Louie (Jimmy Hussey), Joe (Ralph Whitehead), and Moe (Dan Healy), all of whom have thriving businesses (respectively, a tailor’s shop, a barbershop, and a restaurant) and rich sweethearts, Winnie Hill (Madeline Cameron) for Louie, Flora Dale (Evelyn Law) for Joe, and May Meadow (Barbara Newberry) for Moe. Moreover, Betsy’s young sister Ruth (Bobby Perkins) has a young man of her own (Archie, played by Kearns). But cupid steps in and Betsy and Archie decide to tie the knot, leaving the rest of Betsy’s siblings free to pursue their romantic interests (one suspects Ruth finds a prospective husband).

The New York Times found the musical “an elaborate, loose-jointed but withal fairly routine musical comedy, smacking more than a little of the variety halls.” The critic mentioned that opening-night chatter wondered if Baker was “entirely worthy” of the show built around her because there were just a “few moments when she actually added to the gayety” and she sometimes made Rodgers and Hart’s “smart” songs seem “a little heavy and ponderous.” On the other hand, the audience enjoyed the “bathetic balderdash” of her well-known song “My Kid,” and when she introduced “Blue Skies” the audience “recalled her time and again” and “were not satisfied until Mr. Berlin himself took a bow” (Berlin was seated in the front row with his wife, and as he acknowledged the applause, Ziegfeld ensured that Berlin was bathed in a spotlight). For more about the interpolation of “Blue Skies,” see Rodgers’s Musical Stages, where he describes Ziegfeld as “not a nice man,” who lacked “the human touch.”

The Times also reported that Kearns was “personable,” Sammy Lee’s dances were “ingeniously worked out and furiously staged,” Borrah Minnevitch and His Harmonica Symphony Orchestra were the evening’s “unquestioned hit,” and during one number the chorines tossed rubber hot dogs to the audience (no doubt in the Coney Island scene). (Note that one of Minnevitch’s selections was George Gershwin’s “Rhapsody in Blue,” which later in the season was also played by Paul Whiteman and His Orchestra in Jerome Kern’s Lucky.)

Charles Brackett in the New Yorker said Betsy was a “mess,” but with the chorus girls, costumes, and some of the décor, he decided it was a “pretty mess.” Otherwise, the production had “the disjointed total effect of a revue disastrously betrayed by the wiles of a plot that left it flat before the evening was half over.” Burns Mantle in the Chicago Tribune indicated Baker was a kind of “female Al Jolson” who lacked his “sense of characterization,” and after her entrance she was “supposed” to carry the show, but instead the production “just lies down and expires.” In a follow-up piece titled “Betsy Is Flopping,” Mantle estimated the musical cost $100,000 to mount, and when it closed it would be one of Ziegfeld’s “quickest and most expensive failures.”

The Brooklyn Daily Eagle noted that Rodgers and Hart could be proud of their score for the previous evening’s Peggy-Ann, and for Betsy they “might also be proud, but in a small way.” Their “best” contribution was “Sing,” and Berlin’s “Blue Skies” had “every bit of the Berlin virtue” with its “sweet title.” Otherwise, “a great deal of Hebrew dialect” was “strewn all over the meager plot” and the “King’s English” was “entirely, if respectfully, disregarded.” Bushnell Dimond in the Muncie Star Press said the show had “exterior glitter” but was “empty of humor,” and Baker was “out of her element.” According to Variety, the show was “butchered,” and all it had to offer was “production” because it gave the players “nothing to handle.” Betsy began as a musical comedy, then veered toward a revue, and “finally settled down into flat vaudeville—very flat.” The critic reported that after the multi-encored “Blue Skies,” Jimmy Hussey remarked, “Let’s go back to the plot,” but Variety noted that “neither Jimmy nor anyone else could find the plot.” A Rialto rumor had it that the money behind Betsy wasn’t from Ziegfeld but from an unspecified angel, and Variety said “perhaps if Ziggy had had his own money in it he would have given the thing some attention.”

During the tryout, nine numbers were cut: “Come and Tell Me,” “Don’t Believe” (lyric and music by Irving Caesar and M. Siegel), “Show Me How to Make Love,” “At the Saskatchewan,” “A Ladies’ Home Companion,” “(You’re the) Mother Type,” “The Six Little Kitzels,” “In Variety,” and “Tap Dance” (for Madeline Cameron and “12 Little Taps”). “Don’t Believe” was reinstated into the score during the Broadway run when it replaced “The Tales of Hoffman” (lyric and music by Irving Caesar and M. Siegel). “Come and Tell Me” had been dropped from both the tryouts of Peggy-Ann and Betsy, but part of the song was retained for Betsy’s first-act finale. “A Ladies’ Home Companion” was later used in A Connecticut Yankee. “Sing” was later heard in the hit London musical Lady Luck (1927; and among those who performed it were Cyril Ritchard and Leslie Henson) and in Lady Fingers (1929). “If I Were You” was also heard in Lady Luck as well as She’s My Baby (1928). Songs dropped in preproduction were: “Is My Girl Refined?,” “Burn Up,” “Social Work,” “Transformation,” “Viva Italia,” and “A Melican Man.”

Two back-to-back musicals by Richard Rodgers and Lorenz Hart opened on consecutive nights in late December 1926. The well-received Peggy-Ann was one of the team’s biggest hits, but Betsy wasn’t anybody’s girlfriend and folded after thirty-nine performances, making it the team’s second shortest-running musical after Chee-Chee, another title heroine who didn’t interest audiences.

Florenz Ziegfeld gave Betsy a lavish production, but the show was perhaps too elephantine for its own good and the producer overestimated the draw of Belle Baker in the title role. She was a vaudeville favorite who’d never before tested the Broadway waters, and the debacle marked her first and last Broadway appearance. She specialized in sentimental Yiddish songs, and seems to have been a prototype of the Gertrude Berg persona with a singing voice in the style of Sophie Tucker.

One suspects the musical needed a longer tryout, and it’s surprising Ziegfeld gave the expensive production such a short pre-Broadway tour. The world premiere took place at Washington, D.C.’s National Theatre on Tuesday December 21, 1926, where it played five days prior to the New York opening night of December 28. The program credits for the book and the direction were scrambled, and clearly the show was in trouble. The tryout program credited Irving Caesar and David Freedman for the “book” and Bertram Harrison for “dialogue,” but for New York there was no official “book” credit, and so the “dialogue” was attributed to Caesar and Freedman with revisions by William Anthony McGuire (Harrison’s name was no longer in the program). For direction, the tryout’s program credited choreographer Sammy Lee with a “staged by” credit, and for New York McGuire was given a “staged and revised by” credit. For Washington, Louis Gress was the musical director, but for New York he was succeeded by Victor Baravalle.

At almost the last minute Ziegfeld inserted a non-Rodgers and Hart interpolation for Baker to sing because she felt the score didn’t provide her with a big number. And so Irving Berlin’s “Blue Skies” became the show’s hit song, one that has remained a Broadway evergreen for almost a full century (curiously, and despite her numerous recordings, Baker never recorded the iconic song). Rodgers and Hart knew nothing about the interpolation until opening night when they saw the program, which stated that “Blue Skies” was “specially written for Miss Belle Baker by Mr. Irving Berlin.” The Complete Lyrics of Irving Berlin indicates the song was written on approximately December 16 (just five days before the Washington opening and twelve days before the New York premiere), and clearly Ziegfeld and Baker weren’t sharing this information with Rodgers and Hart (Berlin may have assumed Rodgers and Hart knew about the interpolation). The Complete Lyrics includes an amusing parody version of “Blue Skies” (written in 1975, authorship unknown) in which Rodgers and Hart complain that their score was hijacked by the inclusion of Berlin’s song.

Betsy veered into variety-hall territory with a series of specialties, none of which had much to do with the plot: besides “Blue Skies,” there were two musical sequences for Borrah Minnevitch and His Harmonica Symphony Orchestra (the group was later known as Borrah Minnevitch and His Harmonica Rascals); four dance specialties; and a late second-act spot for Baker to perform a medley of her old favorites, including the sentimental “My Kid.”

The Rodgers and Hart songs that have emerged from the score are impressive, particularly the plaintive “This Funny World” (with its sentimental and philosophic outlook, this number surely fit Baker like a glove) and the jubilant, quirky, and thoroughly irresistible “Sing” (for Baker and Allen Kearns). “Stonewall Moscowitz March” (lyric by Hart and Caesar) provides plenty of horseplay with the wordplay, and “In Our Parlor on the Third Floor Back” (a lyric that is presumed lost) seems to be in the mode of the era’s bungalow/cottage/hideaway ballads. 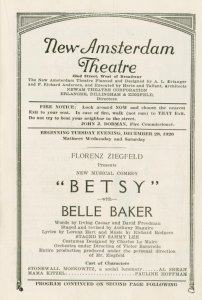