It’s a dismal day at the Addams family’s manse, with the ever-approaching storm clouds reflecting the gloomy atmosphere that has beset the household. Daughter Wednesday, now eighteen years old, has found herself experiencing a surprising new sensation, one that frightens both her and her family: she has fallen in love. Lucas Beineke, the object of her affections, comes from a seemingly normal family, and he and his parents Mal and Alice are on their way to the Addams’ estate to become better acquainted with the family over dinner. Brother Pugsley, who has been largely ignored since Wednesday’s involvement with Lucas, begins to miss the attention his sister previously paid to him and pleads with her to torture him once more. Meanwhile, mother Morticia finds herself conflicted over her ever-maturing daughter’s newfound feelings, while oblivious father Gomez simply wishes things would remain the way they were. As they learn to relate to the Beinekes and cope with Wednesday’s romance, one thing is certain: the Addams family will never be the same.

In 2007, the producers announced that they had obtained the rights from the Tee and Charles Addams Foundation to create a musical adaptation of The Addams Family for Broadway, and they anticipated an opening during the 2009–2010 season after an out-of-town tryout. This was the first time that Charles Addams' comic creations were licensed to serve as the basis for a stage production.[1] The Addams Foundation reportedly retained control over the show's content and insisted that, instead of drawing the plot from The Addams Family television series or films, the production team devise an original musical based solely on Addams' cartoons.
Marshall Brickman and Rick Elice were engaged to write the book, with Andrew Lippa composing the show's score. Improbable Theatre founders Julian Crouch and Phelim McDermott were the original directors and designers, with choreography by Sergio Trujillo.[1] Crouch said that, when brainstorming ideas for the overall appearance of the show, he and McDermott turned to the character of Uncle Fester for inspiration, asking themselves, "If Fester was going to do a Broadway show, what kind of Broadway show would he do?"[6] The partners described the result as "an off-beat take on 19th Century Gothic."
Some changes were made after the Chicago tryout. The songs "Clandango", "Passionate and True", "At Seven", and "Second Banana" and were replaced with "When You're an Addams, "Where Did We Go Wrong?", "Morticia", and "Just Around the Corner". The songs "One Normal Night", "Full Disclosure, Part 2", "Crazier Than You", "Move Toward the Darkness", and "Tango De Amor" were rewritten.

Broadway (2010–2011))
The show began previews on Broadway at the Lunt-Fontanne Theatre on March 8, 2010, with an official opening night of April 8. The production was originally estimated to cost $10 million, but more recent reports give the budget as $15 million.
All of the cast from the tryout transferred to Broadway. The creative team includes direction by McDermott and Crouch, choreography by Trujillo, lighting by Natasha Katz, puppets by Basil Twist, special effects by Gregory Meeh, and orchestrations by Larry Hochman. A May 2011 article in Playbill reported that the show had now grossed over $62 million.
The show celebrated its 500th performance on June 16, 2011. Playbill reported in May 2011 that "[p]lans for other international productions are currently underway."
The Broadway production will close on December 31, 2011, and will have played 34 previews and 725 performances at closing.

US tour (2011–)
A United States tour began in September 2011 at the Mahalia Jackson Theater for the Performing Arts in New Orleans.[15] Tour stops include Miami, Boston, Hartford, Saint Paul, Philadelphia, Dallas, Pittsburgh, Buffalo, Los Angeles, Kansas City, Orlando, and San Diego. Most of these cities include those that are members of Elephant Eye Theatricals and worked on producing The Addams Family on Broadway and tour. An engagement is also planned for Toronto, Canada, at the Toronto Centre for the Arts, starting on November 16, 2011, and running until November 27, 2011. Douglas Sills and Sara Gettelfinger play Gomez and Morticia Addams, respectively. The touring version has "a new central plot conflict, new or revised or reordered songs to replace old ones, fresh orchestrations and dance where necessary."

††Not included on Broadway cast album. 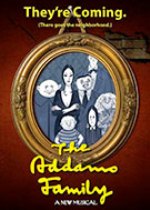 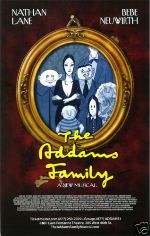 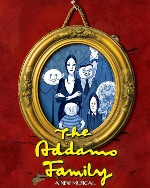 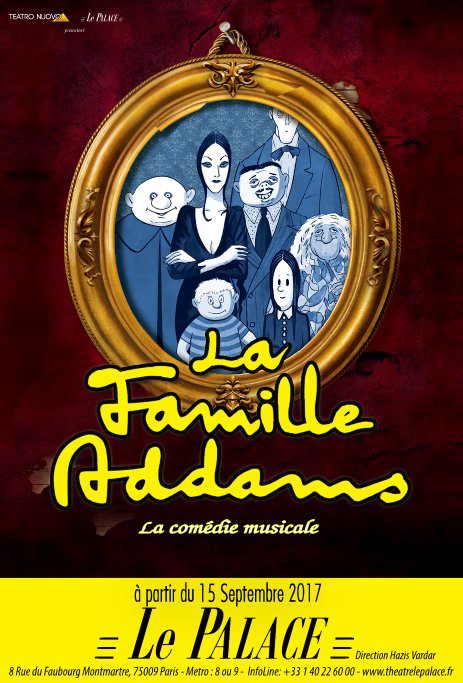 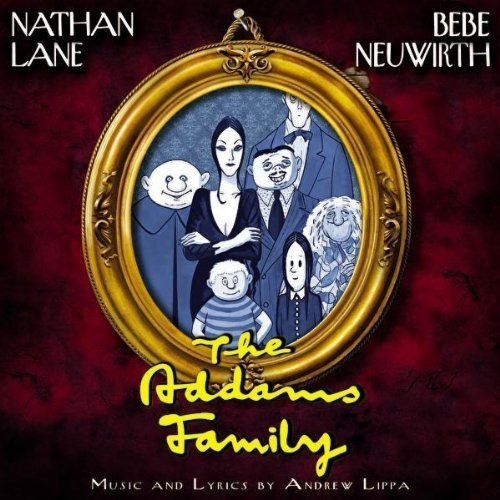