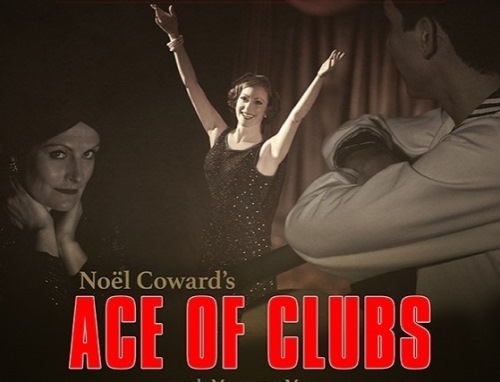 Benny runs the Soho nightclub "The Ace of Clubs" for the owner, Rita. Felix, the compère, introduces the club's girls, who perform their opening number. Benny plans the pickup of a parcel with a gangster, Smiling Snyder. The parcel is in the cloakroom wrapped in a raincoat. When Snyder forcibly steals a kiss from Pinkie Leroy, the club's star, in the middle of her act, a sailor named Harry punches Snyder, who draws his gun and fires. Pinkie takes the raincoat to cover her skimpy costume and escapes with Harry.

Harry and Pinkie discover the parcel in the raincoat, but it falls out and Harry finds it after Pinkie goes back to the club. Benny is already looking for the missing parcel, and Rita, who is in love with him, realises that Benny is involved with the gangsters. At rehearsal the next afternoon, Harry comes by to see Pinkie. Detective-lnspector Warrilove arrives to investigate a jewel robbery and shooting. He suspects Snyder. Benny discourages Pinkie from becoming involved with Harry. That evening Snyder and his associate, Guy, kidnap Harry during the show, but he escapes. Pinkie, afraid for Harry's safety, promises Benny that she will get the parcel. Harry is hidden, and after Benny leaves, he and Pinkie meet.

The next day, Harry return with the parcel, suggesting that they give it to the police. Pinkie disagrees, and they argue. That evening, one of the girls mistakes the parcel for her birthday present and opens it, finding the purloined necklace. Snyder and Gus pick up the parcel in exchange for cash. Rita hears that the stolen necklace has been traced to the club. She asks the gangsters to leave. In the club, Warrilove notices the necklace, which the birthday girl is wearing, and he follows her. Snyder and Gus open the parcel to find the birthday present, a pair of falsies. They return to the club, and Warrilove catches them. All ends happily for Benny and Rita as well as Pinkie and Harry.

This musical created in 1950 was written, composed and directed by Noël Coward. Tom Arnold opened it at the Palace Theatre, Manchester, on 16 May 1950, followed by more tryouts at the Liverpool Empire Theatre(2 weeks) and the Birmingham Alhambra Theatre (2 weeks).

It transferred to the Cambridge Theatre, London, on 7 July 1950 where it ran for 211 performances until 6 January 1951. The cast included Pat Kirkwood, Sylvia Cecil, Graham Payn, Jean Carson and Myles Eason. Mantovani was the musical director.

The show is set in a 1949 London nightclub called "Ace of Clubs". Nightclub singer Pinkie Leroy falls in love with a sailor. Pinkie and her lover get mixed up with gangsters, a lost package and a missing diamond necklace. In the end, the police arrest the perpetrators, and Pinkie gets her man.

Despite its modest run, it contained several songs that survived independently, in Coward's later cabaret acts and elsewhere, including "Sail Away" and "I Like America." A CD of the original London cast recording was released in 2004

Top of the morning –
My kind of man – Pinkie
This could be true – Pinkie, Harry
Nothing can last for ever – Rita
Something about a sailor – Harry
I'll never, never know – Pinkie
Three juvenile delinquents – The Delinquents
Sail away – Harry
Josephine – Pinkie
Would you like to stick a pin in my balloon –
In a boat, on a lake, with my darling – Pinkie, Harry
I like America – Harry
Why does love get in the way so? – Pinkie
Evening in summer – Rita
Baby's bottle –
Chase me, Charlie – Pinkie

Critical reaction
The Times thought that Coward had striven too hard for popular success with his score: "In spite of the mixed reception it is possible that Ace of Clubs, for all its crudity and its slightly old-fashioned air, will give a great many people what they consider lively entertainment. But Mr Coward’s usual public will feel that he has temporarily deserted them."
The Manchester Guardian was more favourable, calling the show "essentially a good-tempered frolic... unlikely to knock spots off Oklahoma but it is in essence not only more genial, but more intelligent." It praised Coward’s protégé Graham Payn, who "dances with consummate grace... singularly fresh and boyish", adding, whether innocently or not, "Benevolent Uncle Noel has found a first-class nephew" 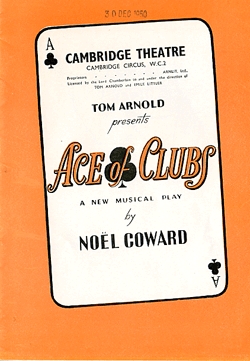 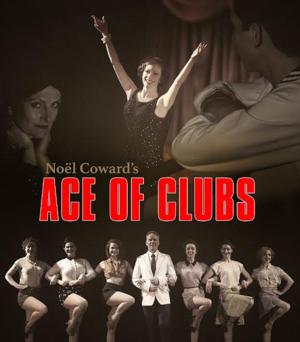